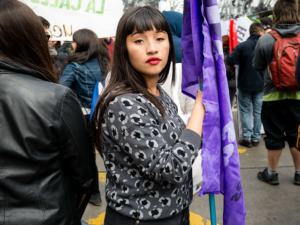 The youngest government minister in the world, Shamma bint Suhail Faris Mazrui became Minister of State for Youth Affairs in the UAE in 2016. One of her main views on what youths can add to public affairs and relations is resourcefulness, arguing, “Hopelessness results when youth are not seen as resources, and apathy results they’re not seen as assets.”

Mazrui’s vision is to bring more youths into the private sectors of the UAE and not just into public affairs. She believes that the change of a nation starts with the investment of the youth. Ultimately, her goal is to set a vision into the youth’s eyes that there is something more important than living solely for yourself.

In 2009, the government of Peru released its jungles from protection and opened them for scavenging and oil extraction. That year, nineteen-year-old Majandra Rodriguez Acha decided she would not stand for her jungles to be exploited. A group of activists including Ahca chanted “La selva no se vende, la selva se defiende.” In English, “You don’t sell the jungles, you defend them.”

Since then, Acha has formed a group called TierrActiva Perú. The group advocates for the voice of the jungle. It reconciles urban youth groups to indigenous youth groups in Peru directly affected by the exploitation of the jungles.

In 2014, Acha organized a conference that brought together over 100 indigenous and urban youths, mainly under 30 years old. Acha says, “We believe that people are experts of their own reality” and the conference was one of little convention. The people were free to come up to the stage, write on a whiteboard, and express their own emotions and ideas towards bettering Peru.

China has been under the rule of the communist party for sixty-six years. The country runs on the traditional principles of efficient work and a conventional, stable family-core. However, in 2015, emerging social activists like Li Maizi challenged these values.

China has no laws or allowance for activism which does not conform to the structure of society within the country. Maizi and others handed out stickers on International Women’s Day in 2015. They were protesting and raising awareness of sexual abuse and harassment. These women were detained and interrogated. Maizi herself was imprisoned for over thirty-five days but was released after being labeled a spy.

Four other women were detained alongside Maizi. All either queer or labeled as free-women, meaning they do not wish to have children, they have been called the Feminist Five. The group realize public rallies in their country are not possible. To succeed in fighting against the oppression of women,  they have to formulate different tactics to raise awareness.

Maizi believes that the U.S. is a breeding ground for social activism. She believes it has the right political and social atmosphere to transcend borders and empower China. “If we don’t set up this group in the U.S., China’s feminist movement will become too passive. The position of our core activists is extremely fragile and we don’t know when the police will come and arrest someone again—it could be today or tomorrow,” she says.

The government of Chad has cracked down on social activism and freedom of speech within the last two years. It has also banned peaceful protests within the country. Alioune Tine is the Amnesty International West and Central Africa Director. He has said that officials have made criticism of their government something that cannot be voiced or acted upon.

Many of the known political and social activists in Chad have reached out to Amnesty International, stating that they have received phone calls and harassment. They allege that the calls include interrogatory questions which leave them afraid and confused.

Tine says that Chad is at a crossroads. It must choose between muzzling citizens and critics of its government or to walk in the promises made by the president during his election.

These emerging social activists are just a few among many around the world who are standing up and speaking out despite opposition. As Acha said, “people are experts to their own reality.” These experts believe people have a right to be heard.