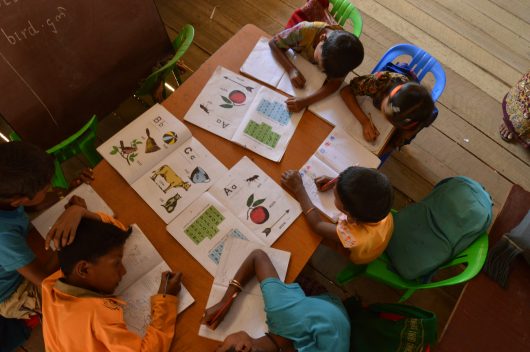 Hundreds of thousands of ethnic Muslims from Myanmar’s Rakhine State have been fleeing to Bangladesh with the hope of finding shelter from the extreme violence they have had to endure. As the minority group of Myanmar, the Rohingya Muslims are the populations facing discrimination and persecution from the Buddhist majority, which is defined by U.N. human rights officials as “ethnic cleansing.”

Rohingya refugees were therefore forced to escape their country to find safety in neighboring Bangladesh, which already housed almost 430,000 of those refugees. With the increasing influx of refugees fleeing into Cox’s Bazar, Bangladesh, the country has announced that it will create the world’s largest refugee settlement with the capacity to shelter 800,000 displaced Rohingya Muslims, including children.

According to UNICEF, 250,000 Rohingya children have escaped from Myanmar to the host community of Bangladesh, making up at least 60% of all refugees. According to the research-based advocacy project — the Arakan Project — education for Rohingya children has always been at risk, as most of them did not have the chance to attend school due to poverty factors and lack of schools. Additionally, Rohingya students are being barred access from universities in Burma. Now living in refugee camps in Bangladesh, some of the students are missing out on proper education, as secondary schools in camps are not allowed by the Bangladeshi government.

However, UNICEF has been working toward providing proper education for Rohingya children within the camps. On September 29, the organization announced that it will build new learning centers for Rohingya children in addition to the 182 existing centers in the camps. In total, UNICEF is planning to increase its numbers to 1,300 learning centers in order to provide education to the expected 200,000 child refugees coming to Bangladesh.

These learning centers will only provide education to children ranging from ages four to 14. Therefore, education for Rohingya children older than 14 is still compromised, leading to illiteracy for the majority of those students. Currently, there is an estimated total of 80% of Rohingya people being illiterate. UNICEF is working on developing additional educational opportunities for the future of Rohingya children.