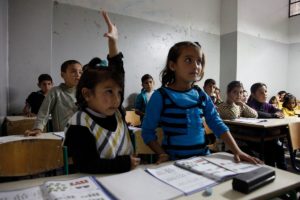 The Syrian Civil War began almost a decade ago and has effectively destroyed many aspects of governance and civilization throughout the historic Levant nation—including education. 5.8 million children from preschool to secondary school age were in need of education assistance in 2018, and about 3 million Syrian children—both in Syria and in surrounding countries as refugees—lack access to education altogether. Direct attacks on schools have been common since the conflict began, resulting in the damage or destruction of one-third of Syrian schools and the unemployment of almost 200,000 education workers. This situation has persisted for years, threatening an entire generation of Syrian children with a dire education crisis in Syria.

The general lack of access to education means that Syrians will have an increased difficulty enrolling in schools in later years. This domino effect will inhibit development and economic opportunities for millions of Syrians. A lack of development will perpetuate the country’s track record of conflict and humanitarian need. Poverty in Syria is a direct result of violent conflict. Poverty will only worsen as an increased number of uneducated Syrians enter the workforce. Although education is a fundamental right, it is becoming a rarity in Syria. Even those with access to schooling experience crowded classrooms, psychological trauma, curricula and language issues, poor teaching quality and lack of learning materials. These struggles associated with the education crisis in Syria have led nearly one-third of students to drop out before finishing primary school.

Over 6 million Syrians are internally displaced persons (IDPs), with about 50% of those IDPs being children. Fortunately, government bodies including the government of Syria, the opposition Syrian Interim Government and smaller local government bodies provide a semblance of education to IDPs. Non-Syrian government organizations are also involved, including Islamist groups, the U.N. and the Turkish government. There is very little coordination between these groups, though, endangering Syrian IDPs’ abilities to access reliable, standardized education.

Government structures and the Syrian economy incurred severe damage over the past decade. Many Syrian families deem it impractical to invest in education for their children, especially when that investment requires sacrificing food or shelter. Although this education crisis in Syria is certainly multifaceted, a lack of cohesion in the sector will worsen conditions. Families will increasingly turn to child labor and early marriage for financial stability.

The situation is just as dire for Syrian refugees in surrounding countries. About 1.5 million school-aged Syrians live in Turkey, Jordan and Lebanon, yet half do not have access to formal education. In these countries, the threat of child labor and language barriers are nearly insurmountable. However, the governments of those countries have made considerable efforts to provide education to Syrian refugees within their borders.

In spite of these government initiatives, Syrian refugees still face obstacles in obtaining a quality education. Only 25% of secondary school-aged children in Jordan are enrolled in school. Reasons for low enrollment are similar to those in Syria: poverty, lack of safe and affordable transportation and poor quality of education. For Jordanians, there is also little practical value in continuing education without reliable professional opportunities. Various administrative barriers exist to enrolling and there is a lack of accommodations for students with special needs.

The Jordanian government, with funds from foreign donors and NGOs, has a fairly successful primary education program, but international support has prioritized this program at the expense of valuable secondary school experience. As a result, this critical age group is neglected and left vulnerable to the implications of dropping out. Failing to enroll in secondary school undermines efforts to provide primary education, as students drop out after those first years.

Despite stark barriers for Syrian refugees throughout the region, international efforts provide some hope. UNICEF leads the response with a systematic approach, improving the capacity of the Syrian education system. They train teachers, rehabilitate schools, provide accelerated and self-learning programs and supply schools with essential learning resources.

On an international scale, UNICEF also works with Save the Children to target Syrian children in Syria, Turkey, Lebanon, Jordan, Iraq and Egypt by providing overall technical support. The NGO World Refugees School (WRS), backed by the internationally recognized City & Guilds, provides formal education to refugee and displaced children throughout the world. WRS has helped 6,000 students in northern Syria graduate in six pilot schools as of late 2019. It is also working toward its goal of expanding to 40 schools nationwide. WRS uses technology to compensate for poor access to materials. It focuses on the use of digitized textbooks, e-learning platforms and mobile classrooms to alleviate pressure on students and teachers.

The education crisis in Syria is severe and has gone unaddressed for years. The Syrian civil war has stolen an entire generation’s right to education. Even the multitude of government bodies and NGOs have struggled to form a cohesive system for Syrian children. However, the international community and humanitarian organizations provide hope for saving this generation from an endemic lack of formal education.