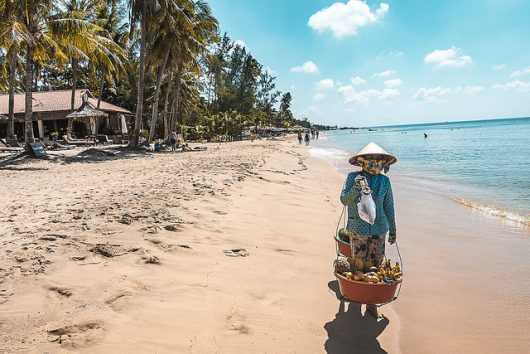 From 2010 to 2016, Vietnam’s poverty headcount ratio fell considerably from 20.7 to 9.8 percent of its population. Another significant amount of growth is reflected in Vietnam’s GDP, which increased from approximately $6.3 billion in 1989 to an estimated $205.3 billion in 2016. This extensive growth is linked to Vietnam’s reform in economic policy in the mid-1980’s, which in turn prompted labor reform in Vietnam.

In 1986, the Vietnam government initiated the Đổi Mới, a series of economic policy reforms that affected the country’s rapid recovery and furthered development.

The reform marked Vietnam’s transition from a centralized economy to an open-market one, otherwise known as an open door policy. The open door policy was intended “to promote a multi-sector economic system, emphasizing the state sector, while encouraging the private sector.”

According to the Social Watch, this change increased the gap between the rich and poor, which threatened the progress of poverty reduction.

Amid these economic policy changes and growing disparities between socioeconomic classes, labor rights came to the forefront in Vietnam’s policy agenda. Below are several examples of the reformed labor rights.

The Human Rights Watch reported the formation of “independent trade unions” as a result of activist efforts in October 2006. These unions aimed to “protect the rights of workers” and “disseminate information about worker’s rights and exploitive and abusive labor conditions.”

For example, the United Worker-Farmers Organization of Vietnam and the Independent Worker’s Union of Vietnam supported farmers whose lands were taken. It is important to note that these “independent trade unions” are not officially acknowledged by Vietnam law.

According to the World Bank, the gender gap is lessening. As of 2015, households led by women were “less likely to be poor than male-headed households” while the enrollment rates for girls and boys in primary and junior secondary school were almost equal.

In addition, the World Bank noted that women’s participation in the labour force “is within 10 percent of that of men”, a gap which is smaller than in most countries worldwide.

Despite advances in labor reform in Vietnam, the move toward independent labor unions was halted when the U.S. left the Trans-Pacific Partnership (TPP). In July 2017, The Diplomat noted that trade unions in Vietnam strongly relied on the financial support and management from the state. Furthermore, Vietnamese laws require contributions to a trade union fund from employers, effectively making trade unions financially dependent on employers.

This is especially concerning in the wake of the U.S. leaving the TPP, as it halted Vietnam’s labor rights reform. The Diplomat emphasized that “many people argued that the need for labor rights reform is gone because there is no more demand for reform from the United States.”

However, there is a solution to the current state of limited labor rights and corrupt workplaces.

Vietnam can counter corruption through reform, coined as “Đổi Mới II,” which focuses on fighting corruption and enhancing institutional legitimacy through increased democratization. By applying the rule of law more rigorously, governance can be improved.

Labor reform in Vietnam, while not occuring rapidly, is experiencing activism, protests, and potential uncertainty. Despite these factors, however, improvements are possible, especially with the “Đổi Mới II” reform policy and initiatives like introducing independent labor unions, which curtail corruption and advocate on behalf of Vietnam’s laborers.