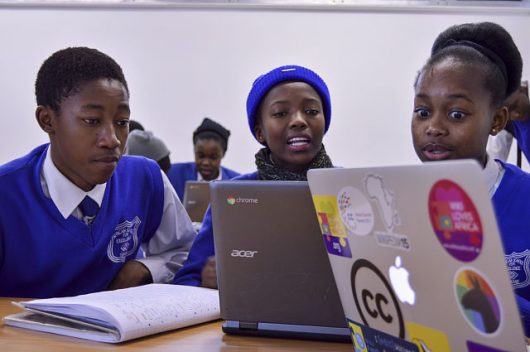 Education is now moving beyond paper and whiteboard. Thanks to a vast network of online learning tools, education has become more attainable particularly to groups in Africa that are suffering from the highest rates of educational exclusion.

Already, $8.15 billion has been invested globally in the first 10 months of 2017 into edtech companies. Realizing the new opportunities made feasible by the advent of educational technology, communities in Africa have incorporated a new digital teaching system that changes education in rural schools.

The rising Ligbron E-learning System facilitates an online network of mathematics and science lessons. Two South African schools, Jabavu and Thubalethu high schools, in the Eastern Cape recently joined the community that is growing close to 39,000 learners with 5,400 being in grade 12.

Since its inception in Mpumalanga in June 2015, 31 secondary schools have been supplemented with this system with great success. The overall pass rate of Umzimvelo Secondary School in Mpumalanga has increased from 38.3 percent in 2009 to 94.5 percent in 2016.

The system connects students in rural areas using live streaming and video technology in virtual real-time classes. Students can communicate with teachers using SMART boards, computers and laptops as well as audio equipment. Prior to each class, they would have full access to class notes and other learning materials via Dropbox.

This program provides teachers the resources for a full curriculum including daily lesson plans, pre-recorded video lessons and more. The live stream lessons can all be saved and replayed for convenience as well. Education in rural schools has suddenly become more exciting and achievable for students.

The productivity of the students and quality of the education have both undergone significant improvement courtesy educational technology. After analyzing this system in Mpumalanga, studies show that it was successful in contributing to the Department of Education’s mandate to increase education, particularly that of math and science.

The Coca-Cola Beverages South Africa (CCBSA) has been particularly interested in the mission of the Ligbron E-learning System and hopes for its success to materialize in the Eastern Cape as well. “We were very heartened when we partnered with LES on this initiative to hear that learners gain 34.5 percent more knowledge after a 40-minute e-learning maths class, with a 19 percent spike in knowledge after a science class,” said the Head of Community and Stakeholder Partnerships (CCBSA), Nolundi Mzimba, in his speech after the launch of the Ligbron E-learning System’s sponsorship.

The growth of education is inextricably linked to the growth of the economy. Increasing the level of education in Africa will increase the pass rate in important subjects. The community would then have opportunities to acquire the skills they need for better jobs.

The Ligbron Academy of Technology is adamant about being up-to-date with these educational technologies to prepare students and teachers in this new century of technological boom. Its staff members travel to speak with congresses in South Africa on a regular basis to keep the lines of communication open and active.

Africa can bring about a positive change in its education system, especially in rural schools, and eventually resolve the poverty crisis by taking advantage of educational technology.