Tag Archive for: Economic Empowerment for Women in Cambodia 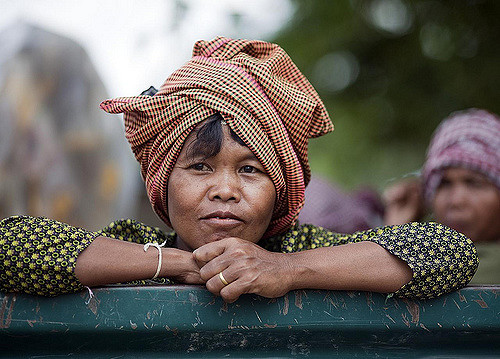 The opportunities for marginalized women in Cambodia, specifically in the workforce, are limited due to discrimination and traditional patriarchal attitudes that persist in the country. Women are less likely to receive an education than their male counterparts, putting them at an even greater disadvantage in the job market.

So for girls leaving rural villages to try to earn money for themselves and their families, garment work and sex work are the only major employment possibilities. The two trades are often linked. For example, if a girl from the countryside migrates to the city to work in a garment factory, then loses her job because the manufacturer closes up and “runs away” to another location, she may be forced to work as a prostitute in order to survive. Meanwhile, prostitutes who are arrested are often re-trained to work in the garment industry, where they face similar abuses as they did as sex workers, including sexual, physical and verbal abuse.

It is difficult to change the status quo in a country where protest is basically illegal and very dangerous. Dissenters face arrest, torture and murder. Cambodia has been ruled by Prime Minister Hun Sen of the Cambodian People’s Party since 1985. He and the party have been criticized for an increasingly authoritarian rule and silencing any dissenters. Sen just won re-election on July 29 (after banning the opposition party) and will be in power for at least another five years.

However, this repression has not been totally successful in silencing activists. The United Sisterhood Alliance (Us) is an organization that has been helping marginalized women in Cambodia recognize their rights and makes their voices heard.

Us receives funding from organizations such as Oxfam, American Jewish World Service, and the Global Fund for Women. It consists of an alliance of four linked organizations:

These are explained in more detail below.

Social Action for Community and Development

The SACD  is a resource organization whose end goal is a “critical people’s movement for social and economic justice, to call for an end of all forms of discrimination and to have equal access to fundamental human rights.” They work mostly with women in the sex and garment industries, but also with farmers and people of low-economic status, with a particular focus on improving the health care system for the most impoverished members of society. They host community forums and essay competitions to encourage public participation.

The Messenger Band is one of the Us’s most creative projects. The musical group was started by Vun Em, who moved to Phnom Penh, Cambodia’s capital, as a teenager to work in the garment industry. Like other women in that trade, she faced sexual harassment, low wages and long hours. These topics come up in the Messenger Band’s music. Among her well-known songs are The Tears of a Garment Worker and Suffer from Privatization. Em also records female garment workers telling their stories. These stories are then turned into songs, music videos and plays that help to educate the public about what marginalized women in Cambodia are facing.

Performing issue-based songs and plays is dangerous in Hun Sen’s Cambodia, but when confronted about her activism, “I tell police and soldiers I am just a musician,” Vun said. The group has, therefore, managed to avoid persecution.

Women’s Network for Unity started in 2002 and consists of a network of 6,400 sex workers of various sexual and gender orientations. WNU fights for access to social services, liberation from discrimination and violence, and the empowerment of sex workers to make their voices heard and advocate for their rights.

In 2008, due to outside foreign pressure, the Cambodian government launched an anti-trafficking campaign with the supposed intention of saving victims of sex trafficking. However, members of the WNU say that the campaign has actually hurt the cause more than helping it.

Police go on raids where they arrest prostitutes and often berate them physically and verbally. They are then “encouraged” (with the only alternative being to sit in jail)  to be re-trained to work in the garment factories. But sex workers who go through the training say they received minimal instruction, had their pay docked during training and have also endured physical and sexual abuse at the factories. Many former sex-workers-turned-seamstresses have told interviewers that they actually preferred life on the streets to the terrible conditions and low pay in garment factories.

One of WIC’s most effective strategies are the drop-in centers operating in worker neighborhoods on the outskirts of Phnom Penh near garment factories. These drop-in centers provide legal assistance and train women to understand their legal rights both under Cambodian law and the regulations of the International Labor Organization.

Women are counseled in cases of domestic violence and offered access to peer networks. They join regular discussion groups, cooking classes and workshops to learn how to prevent conceiving children and seek help in cases of domestic violence and what kinds of herbs to use to treat illnesses that garment workers are prone to such as urinary tract infections, yeast infections and repetitive stress injuries.

WIC also promotes women’s leadership in garment unions. Their overall goal is to create an environment of greater gender equality in the labor movement and the Cambodian government.

These four social groups that make up the United Sisterhood Alliance are changing lives and creating community among the marginalized women in Cambodia.