Tag Archive for: Ebola in Nigeria 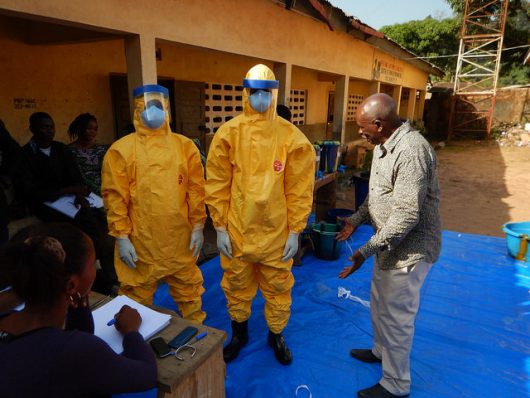 The Ebola virus is a very rare, but very deadly, disease that occurs in humans and other primates. It originates from sub-Saharan Africa where the viruses causing the disease are found. People contract it after contact with an infected person or animal, whether alive or dead. So far, there is no approved vaccine or treatment for the virus as yet, and it is currently treated by dealing with the symptoms.

The History of Ebola in Nigeria

The history of Ebola in Nigeria is, fortunately, a short one. The deadly virus found its way onto Nigerian soil on July 20, 2014, by airplane after a Liberian man infected by the virus had flown into Lagos from Monrovia. He collapsed shortly after landing and was rushed to a hospital where he was tested for malaria as well as HIV before the doctors checked for Ebola, which yielded a positive result. The man died on July 25, 2014.

Upon discovery, The Nigerian Port Health Services began performing tests and trying to trace those possibly infected. An announcement was made notifying the public of the virus’ presence and its dangers. Precautions were taken to ensure that patients of the virus be isolated and treatment facilities, also standing as quarantines, were set up in Lagos and, eventually, in Port Harcourt.

The infected man exposed 72 people to the virus at the airport and in the hospital. After his death, it was confirmed that 19 people were infected, but only seven of those people died, making the total fatality of the situation close to 40 percent.

Response to the Threat

There was a grave threat posed to the country’s well being and its population by the arrival of the virus in Lagos, the largest city in Africa and a central hub of activity, particularly because of its crowded nature. The over-population alone, without the lack of equipment and facilities, posed a major threat that the Ebola virus could spread like wildfire, wiping out millions of people in a short period of time.

Another threat posed to the country was the lack of supplies and equipment because it put the healthcare professionals at risk of contracting and even transmitting the disease while treating infected patients. However, the Nigeria Center for Disease Control (NCDC) reacted quite quickly to the situation, and the rapid response played a big part in the speed and precision with which the disease was contained.

The World Health Organisation (WHO), along with The United States Center for Disease Control and Prevention (CDC), Doctors Without Borders, UNICEF and other organizations came together to assist Nigeria in their time of crisis and provided experts who led efforts in tracing the disease as well as in assessing the risks and providing adequate medical care.

The country was officially declared Ebola-free in October of 2014 after twice the maximum incubation period of the disease had passed. Ebola takes 21 days to rear its head in victims, so WHO waited 42 days before finally declaring the country free of the disease. However, the government and health experts in WHO offices in Nigeria still remain alert since the risk of the country being hit by another outbreak through imported cases will always remain high.

The Nigerian government was commended for coordinating an effective response to the outbreak as the government immediately began repurposing funds and resources to the many organizations involved at the onset of the outbreak, which paved the way for the quarantine and treatment of Ebola patients.

While the government’s response was quite adept, a few issues were noted at the time that deterred the speed of elimination of the deadly virus. First, there was a delay in the arrival of resources at The Emergency Operations Center (EOC) and the delay in arrival meant a delay in treatment. The political leaders did not grasp the extent to which even a small outbreak of Ebola would threaten the entire country if it were exposed to the people, especially in public spaces like hospitals and airports.

Additionally, the general public, while made aware of the outbreak, did not know the specifics of the disease and as a result, the broadcasting of the existence in Ebola in the areas caused a panic even in people who were too far away from the location to be affected by it. In their ignorance, people resorted to useless and somewhat harmful methods in order to prevent the virus, such as drinking large amounts of salt water.

There was also a delay in the establishment of a working isolation ward due to the Nigerian health workers refusing to help with the Ebola patients for fear of contracting the virus. This showed a lack of information about how Ebola is transmitted and a lack of training against the virus, a problem which the country would have to fix.

Despite all the issues pointed out, the Nigerian government responded quickly and well enough to ensure that the outbreak was contained and the country was free of the disease. Their decision to use EOCs to respond to the virus ensured that the history of Ebola in Nigeria was a success story, and Nigeria stands as an example of how to deal with emergency outbreaks in the future.