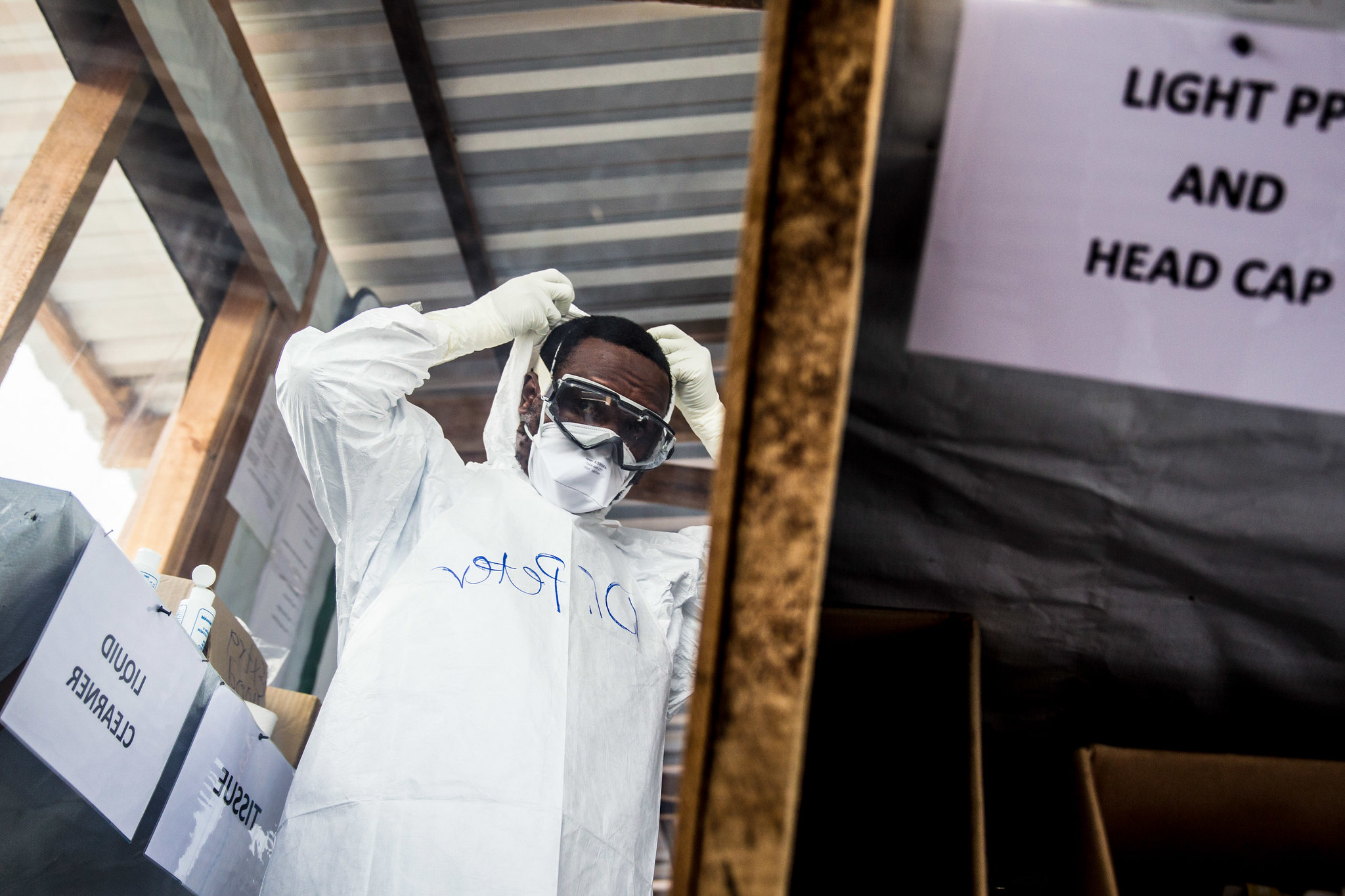 More than 1,100 people in Congo have died due to the recent Ebola outbreak. New treatment facilities, additional health personnel, improved vaccinations, and awareness campaigns should effectively be controlling the spread of Ebola. In spite of this, distrust is breeding Ebola as citizens reject available aid.

However, violence and distrust are increasing the risk of Ebola in Congo. This Ebola outbreak is the second worst outbreak in history and the solution is extremely complicated. Local militias in Congo have been burning down clinics and threatening physicians since January. Historically, residents have had to fear for their own safety and flee local armed extremist groups.

Now, with the recent outbreak of Ebola, already vulnerable communities are experiencing a double layered threat of violence and disease. Reports show that the number of people infected with Ebola rises after violent conflicts. These areas are often unsafe for health workers, increasing the risk for Ebola to spread. Much of the violence pointed toward clinics and health workers stems from a widespread distrust of the government and foreign aid. This distrust is breeding Ebola, unnecessarily increasing the risk of contraction.

Despite these challenges, many international organizations are still trying to control the spread of Ebola in Congo and provide aid to those already infected. The World Health Organization reported 119 attacks on health workers. This has inspired international organizations to approach their methods for care differently. Aid workers are attempting to provide correct information to the population in Congo in order to debunk the propaganda being spread about the government and international aid. Often in public, health workers downplay their role to try and build trust within communities. The International Rescue Committee states, “Our staff has to lie about being doctors in order to treat people.”

The New Humanitarian is exploring why a deep distrust of government and foreign aid exists in Congo. Social media seems to be a large player in spreading misinformation. As such, 86 percent of adults surveyed in Beni and Butembo stated they do not believe that Ebola is real. Others believe Ebola is a method used by the government to destabilize certain areas. Similarly, many people fear treatment centers are making Ebola worse. Facebook and WhatsApp are major players in spreading this false information. The Ministry of Health has said they are working to monitor these pages and adapt local messages to make sure the truth is out there.

The control of Ebola is entirely possible through vaccines and prevention efforts. Instead, distrust is breeding Ebola in Congo as risk increases. Working to end this distrust and limit violence toward health workers through the spread of true information, is essential in stopping the spread of Ebola. The World Health Organization, the Center for Disease Control and other health agencies and organizations are working to provide more aid to those affected by Ebola, hoping to prevent spread beyond the region. 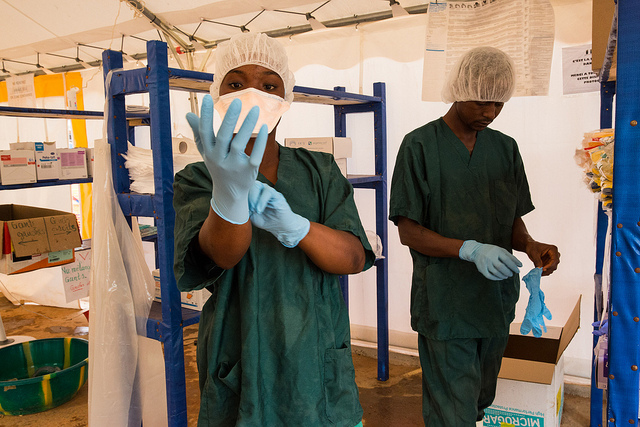 With no definite cure, the Ebola virus is highly contagious and easily transmitted through direct contact with bodily fluids, contaminated objects, broken skin or mucus of infected humans, fruit bats and non-human primates (both living and deceased). Common symptoms of Ebola include fever, muscle pain, fatigue, unexplained hemorrhage and vomiting. Symptoms appear anywhere between two to 21 days after infection; the average fatality rate is around 50 percent.

The Democratic Republic of the Congo is one country that has been affected by the virus. Since the discovery of the Ebola Virus Disease in 1976, the Democratic Republic of the Congo has experienced nine separate outbreaks, the ninth having been declared on May 18, 2018. As of June 19, there have been 61 total cases reported, including 28 deaths, according to the World Health Organization (WHO). However, this current outbreak is significantly lower than that which hit West Africa in 2014, particularly due to the utilization of “ring vaccination” and increased community public health awareness and intervention.

Ring Vaccination in The Democratic Republic of the Congo

While the Democratic Republic of the Congo has experienced nine Ebola outbreaks, this is the first time ring vaccination has been utilized to contain the virus. A method previously used to control smallpox, ring vaccination seeks to control an infectious disease outbreak by vaccinating and monitoring those close to an infected individual.

The WHO has deployed more than 7,500 doses of a new unlicensed Ebola vaccine, rVSV-ZEBOV, to the Democratic Republic of the Congo’s northwestern province of Equateur, where the outbreak occurred. The vaccine was previously tested in the context of ring vaccination in Guinea at the tail end of West Africa’s 2014 Ebola epidemic. The efficacy was found to be 100 percent with no noted safety concerns.

The vaccines were donated by the pharmaceutical company Merck, along with $1 million for operational costs from Gavi, the Vaccine Alliance.

Ring vaccination cannot solve everything. Since the vaccine must be stored between negative 60 and negative 80 degrees Celsius, it is difficult to effectively transport and store, especially in remote, rural locations. Additionally, ring vaccination relies on the ability to trace, contact and follow up with those in contact with an infected individual. Local communities must be willing to help. Public outlets such as music, radio programming, phone-in programs and religious and educational institutions are being harnessed to increase awareness regarding Ebola as a medical, hygiene-oriented issue. Engraining these ideas in public culture sets the stage for future Ebola containment and prevention.

Furthermore, these public outlets function in parallel with educational work conducted by organizations such as UNICEF and the WHO. These organizations help to dispel skepticism surrounding Ebola’s legitimacy as a disease and the effectiveness of vaccines while simultaneously addressing the needs and concerns of the local community. For example, the WHO released a 12-step guide in October 2017 describing how to bury those who died from either confirmed or suspected Ebola in a way that is safe and observes local custom. This guide has become a staple aspect of how Ebola is contained in remote areas.

Acknowledging the culture of a community reaches those who are less inclined to take outbreaks seriously. Some residents still consider Ebola a product of witchcraft or a curse rather than an infectious disease and tend to turn to traditional healers for treatment instead of modern medicine. Educating the population about public health while respecting traditional beliefs supports open growth and preparedness for future Ebola cases.

Over the past decade, Ebola has become one of the most infamous viruses known to humanity. Although significant strides in treatment have been made, the virus continues to pose a threat to large populations of people. Vaccination is only truly effective when people understand its value and are aware of its benefits, but pure awareness cannot beat the virus without a form of treatment. A combination of education and treatment is critical to prevent future Ebola outbreaks.