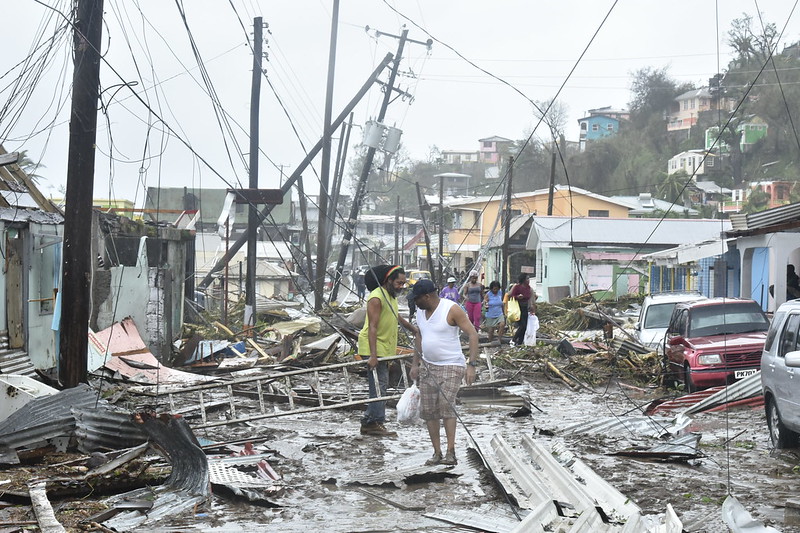 The Caribbean has long been a source of tropical weather including disastrous hurricanes, which can sweep some of the developing Caribbean countries to their feet. With high wind speeds and paths that often hit kilometers wide, hurricanes can be very dangerous to land and its ecosystems and to people and their economies. Before a hurricane ever hits the Caribbean there is already a financial disparity, causing rebuilding to be more difficult for lower-income areas. As a result, supporting the Caribbean is incredibly important.

Homes in lower-income areas usually comprise less expensive materials that cannot withstand a hurricane. Lower-income areas may also not have access to technology for updates on the weather, where to receive assistance in times of a weather crisis and a lack of general communication between family and friends. This can be a huge stressor for those living in low-income areas that experience hurricanes. In Puerto Rico, the poverty rate in 2021 was 43.4%.

A study from Geroge Washington University reported on Hurricane Maria that “mortality that resulted not just from direct impact from the storm but from things like failure to get to a hospital because of impassable roads or insufficient or expired medicine for people with heart ailments or chronic illnesses.” Hurricanes in the Caribbean can exacerbate homeless and further displacement. For this reason, it is necessary that organizations including ECHORN are supporting the Caribbean after hurricanes.

Notable Hurricanes in the Caribbean Between 1979-1994

According to a 2019 St. Lucia Loop News article, the following hurricanes discussed are the deadliest hurricanes to hit the Caribbean thus far. The fourth deadliest hurricane to hit the Caribbean was Hurricane Gordon occurring from November 8 to 21, 1994. Hurricane Gordon made impacts on Jamaica, the Bahamas, Cuba and Turks and Caicos. Windspeeds were up to 85 mph and although it was only a category 1 hurricane, it caused $594.1 million in damage and took 1,152 lives.

The third deadliest hurricane to hit the Caribbean was Hurricane David which hit between August 25 to September 8, 1979. Hurricane David made a major impact on the Dominican Republic, specifically on August 29, 1979. Windspeeds for Hurricane David reached 175 mph causing $1.54 billion in damages. On August 30, 1979, Hurricane David turned into a category 5 hurricane, producing waves of 20-30 feet and mudslides which killed 1, 200 people out of a total of 2,068 deaths.

Notable Hurricanes in the Caribbean Between 2004-2019

The second deadliest hurricane to affect the Caribbean was Hurricane Jeane, which hit Puerto Rica and lasted from September 13-28, 2004. Windspeeds for Hurricane Jeane reached 120 mph and left damages in its wake costing $7.94 billion, according to Loop St. Lucia News.

The deadliest hurricane to occur in the Caribbean from 1979 to 2019 was Hurricane Maria, totaling 3,059 deaths. Hurricane Maria occurred from September 16 to October 2, 2017, and hit Puerto Rico, Antigua and Barbuda, Dominica, Anguilla, The British Virgin Islands, the Bahamas and Turks and Caicos. Hurricane Maria hit the Dominican Republic with winds up to 175 mph in affected areas, causing $96.1 billion in damages, Loop St. Lucia News reports. The hurricane left some areas without food, clean water and electricity for several months.

One can only imagine the devastation that many Caribbean people and islands have endured over the years. Hurricanes can be a deadly part of life for many living in the Caribbean. This is why it is imperative that teams are working remotely and on the ground to aid survivors and rebuild communities of those impacted by Caribbean hurricanes.

The Eastern Caribbean Health Outcomes Research Network is a team of individuals located in various parts of the Caribbean as well as the United States. Dr. Marcella Nunez Smith started ECHORN in 2017 after Hurricane Irma and Maria, “which devastated the Caribbean islands of Puerto Rico, the U.S. Virgin Islands, the British Virgin Islands, St. Martin/St. Maarten, Barbuda, Dominica and many others.” ECHORN is working to alleviate disease in the Caribbean through action-oriented research.

Most of its work pertains to disease research but it also has a Caribbean Hurricane Relief Fund that supports the Caribbean people, land and economy. ECHORN’s reason for helping Caribbean communities after a disaster is because “Climate change causes more severe storms and hurricanes that threaten island communities. The Caribbean is already under serious economic strain from the ongoing pandemic. Decreases in tourism, dependency on food imports and stagnant economic growth have complicated plans for disaster preparedness and recovery.” The ECHORN Hurricane Relief Fund is supporting the Caribbean nonprofits that aid in community health and well-being after natural disasters, such as hurricanes. ECHORN has a committment to providing long-term support to the Caribbean islands. Its goal in supporting Caribbean communities is to rebuild and restore crucial health and social services for the well-being of all who live there.

ECHORN’s Accomplishments in Supporting the Caribbean

ECHORN hurricane relief funds have gone towards rebuilding communities and establishing positive impacts on Caribbean communities. At the Caño Martín Peña ENLACE Project of San Juan, Puerto Rico, ECHORN’s hurricane relief funds were able to help rebuild a community garden, which not only feeds the community but provides safety and community involvement. Additionally, Our Lady of Mount Carmel Catholic Church of St. John, U.S. Virgin Islands was able to purchase a community-sized refrigerator to hold more food to provide for people in the community.

Hand2Earth of St. Vincent & the Grenadines used ECHORN’s hurricane relief funds to support vetiver projects in the Dominican Republic. “Planting the vetiver grass restores and stabilizes eroded landscapes. When harvested, the grass also provides a renewable resource for a craft industry that supports at-risk populations.” Because of ECHORN’s dedication to supporting the Caribbean, efforts have occurred to rebuild and improve Caribbean communities after disaster strikes.