Tag Archive for: Earthquake in Mexico 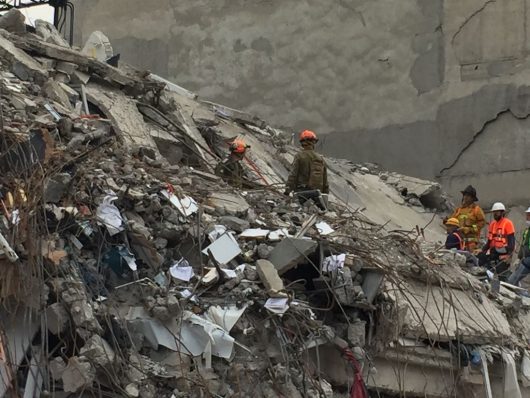 In the wake of the 7.1 magnitude earthquake that hit Mexico City on September 19, 2017, damaging thousands of buildings and killing at least 318 people, the nation of Mexico has come together in a number of ways to recover. One of the most notable ways is the “brigadas,” or the Mexican brigades consisting of volunteers that have helped pull people from the rubble. Ordinary citizens have been a major part of the earthquake recovery in Mexico.

Much of the initial response to the earthquake was formed out of frustration toward the Mexican government, which many citizens view as corrupt and incompetent. The Mexican armed forces, who have taken over much of the recovery, have been accused of gravely mismanaging the earthquake recovery. The military has simultaneously drawn ire for bulldozing buildings suspected of still having people trapped in the rubble, as well as wasting time and resources on futile rescue attempts. One of the higher-profile examples of the latter occurred when the navy spent days searching in vain for Frida Sofia, a 12-year old girl who later turned out not to have existed at all.

Another concern is that the trucks sent by the government with much needed food and medicine will end up being siphoned by corrupt politicians and criminals, or simply sent to places that do not need the aid. This fear is not unfounded; Mexican president Enrique Peña Nieto and his Institutional Revolutionary Party remain very unpopular. Many do not trust the government on any level to handle the earthquake recovery in Mexico.

In spite of this, there have been some bright spots in the recovery efforts. Young people in particular have stepped up as volunteers. Social media apps like Facebook and WhatsApp have become critical tools in coordinating the earthquake recovery in Mexico. Some young people have joined the “brigadas,” which often venture into still-unsafe buildings to find survivors. Others have collected and distributed canned food to hungry citizens. Others still have used whatever talents they have, including music and performance, to entertain children in shelters who now have no home. Many volunteers have taken time off from their lives and livelihoods to assist in what ways they can.

Activists have also taken a stand to lead the way in the recovery. One notable example is a successful online campaign that has forced the major political parties in Mexico, set to spend record sums on the 2018 election, to redirect a quarter of the $375 million of public funds, originally earmarked by the National Electoral Institute, toward the earthquake recovery in Mexico instead.

Currently, many of the streets have been cleared, and people are going back to work and attempting to rebuild their lives. It may take years to fully complete the earthquake recovery in Mexico, but in a country known for its sharp socioeconomic divide, many Mexicans have been heartened by the way the earthquake recovery in Mexico has brought people together across class lines.