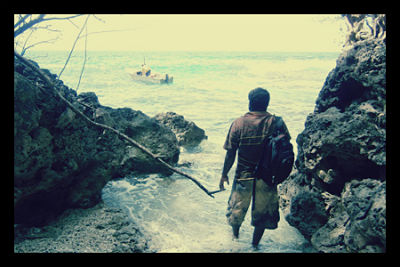 When political crises happen or human rights are being destroyed, the use of smart phones and other technology to spread the word is critical. What about when natural disasters strike? When a family has minutes to evacuate before a tsunami wipes out their village, do they take a picture or tweet about it? No. But the World Health Organization, in cooperation with national and local governments, and by demand of citizens in crisis and an outcry for better preventative measures, is working on building better early warning systems for post-disaster epidemics. The technology? A boat, a bike, your boots. Also needed: a pencil, paper, and your determination.

Recently in the Solomon Islands the immense destructive forces of the 6 February 2013 8.0 magnitude earthquake and pursuant 3m tsunami left thousands of people without homes and brought down the health care system.

The Solomon Islands consist of 1,000 islands off the South Pacific and are home to 550,000 people. The destructive power of the February earthquake left thousands vulnerable to diseases due to the broken health care system. 5500 residents required temporary living shelters. These shelters are often plagued by poor sanitation due to lack of resources and cramped living quarters. Poor sanitation leads to a plethora of preventable diseases—most of which associated with diarrhea.

Taking a queue from the early warning systems set up to warn of impending natural disaster, the World Health Organization worked with the Ministry of Health of the Solomon Islands to set up an early warning system to identify outbreaks, unusual outbreak patterns, and the number of people affected. This is a critical step towards disaster recovery and decreasing the vulnerability of those affected.

Developing the surveillance system presented logistical challenges of connecting vulnerable people to health clinics. Five clinics were set up around Santa Cruz, the main island that was affected. The head nurses, “doubled as boat captains,” connected patients to clinics. Traveling from surveillance sites to the clinics is risky. Poor weather, no lights on the boats, dangerous landing sites and navigational skill are all impediments to the surveillance system. For Solomon Islanders, these risks are necessarily overcome because full coverage is absolutely necessary for the system to work.

The WHO works with the clinics to make sure all the information necessary to identifying and preventing large-scale outbreaks is included in an accessible way. The successful system, now fully functional, has collected data, identified risky areas, and has quickly responded to problems.

The WHO initiative in the Solomon Islands is not unique and neither is their geography. There are 52 developing island nations in the world. These nations carry a disproportionate risk imposed by earthquakes and tsunamis and break down of health systems. Early warning health systems are a part of a larger global strategy to minimize post-natural disaster vulnerability. The WHO works with governments to create a Global Risk and Response system. The main activities include working with governments to set up early warning systems and develop laboratory capacities to handle large amounts of biological material—all of which requires bio-security to keep potential diseases from escaping. Training for and building response strategy plans is also a main function of the WHO’s Global Alert and Response (GAR) system. Seasonally, the GAR supports governments in climate related disease preparedness and creates standardized approaches to climate related diseases such as influenza and malaria.

Sources: Wikipedia, WHO , WHO