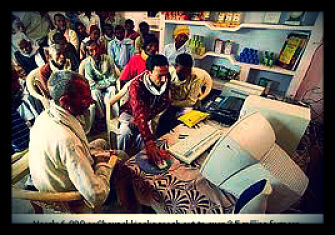 It is an accepted fact that poverty is the root cause of malnutrition. Over 42% of the Indian population lives on less than $1.25 a day. However, if farmers could increase their output and earn more from what they already have through the use of innovative technology, food insecurity could decrease and that same dollar and a quarter could go much further.

Technology can help farmers to augment their knowledge of which crops to produce for the best return, find the most effective farming practices and make plans based upon weather forecasts.

The e-Choupal initiative is one way that technology is being used to give farmers the information they need to be more successful. The aforementioned benefits of technology are all accounted for on the e-Choupal platform, even enabling buyers to come to the farmers instead of having to haul the produce to market, where oftentimes traders manipulate the market in order to exploit the farmers out of their proper earnings.

The initiative also provides access to storage services and agricultural equipment in addition to other important assets for rural farmers. The e-Choupal network has expanded to 6,500 centers synchronizing the efforts of 40,000 villages to produce greater quantities of better produce and profit.

In this same vein of increased technology and higher profits, organic farming is a possible venue poor farmers could explore. Organic produce consistently garner high prices, the demand for which is only rising. The only constraints are the ones that the e-Choupal network is already helping to eradicate, at least in India, including lack of technical expertise and insufficient market knowledge.

Another example of innovative agricultural technology is the use of drip-irrigation, which cuts water use by 40%, and saves the equivalent of 10 million households water expenditures per year. Much in the same way, the e-Choupal initiative has created a network where over 25,000 small farmers have organized a supply chain that has augmented their average annual incomes by a very significant $1,000.

India is a country of fertile lands and capable farmers. Technology is the catalyst that promises to drive the more than 400 million people living on less than $1.25 a day out of poverty.