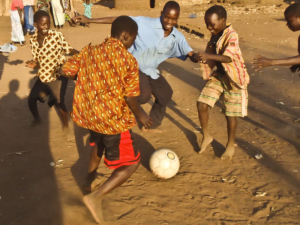 “The [human trafficking] situation was much worse than we first envisaged,” says Maxwell Matewere from the United Nations Office of Drugs and Crime (UNODC) in Malawi. “I even witnessed a kind of Sunday market, where people come to buy children who were then exploited in situations of forced labor and prostitution,” he says to the U.N. The place in question is Malawi’s Dzaleka Refugee Camp. Created in 1994, the U.N. Refugee Agency (UNHCR)  built the camp to accommodate 10,000 refugees escaping war and violence from neighboring countries. It now houses more than 50,000 refugees with even more refugees forced to return to the camp because of the government’s decree. The UNODC and Malawian Police Service have uncovered instances of human trafficking in Malawi’s Dzaleka Refugee Camp.

Human Trafficking in the Refugee Camp

Human trafficking in Malawi’s Dzaleka Refugee Camp takes many forms. Traffickers force men into hard labor while women and girls face sexual exploitation inside the camp or traffickers move them to the city or other countries in southern Africa. Traffickers even recruit children for farm labor and domestic work. Oftentimes, traffickers require refugees to pay off a debt accumulated from “being smuggled into Malawi.” Traffickers then force the victims into labor or prostitution to pay off the debt. The UNODC suspects that the camp may even be a transitory point for larger international human trafficking networks.

Since the discovery of human trafficking in Dzaleka, the UNODC has taken measures to dismantle the organizations, identify and rescue victims as well as prosecute the perpetrators. However, several factors make dismantling human trafficking networks exceptionally difficult.

Despite the difficulty of dismantling human trafficking in Malawi’s Dzaleka Refugee Camp, the UNODC and UNHCR are determined in their goals. Not only have they implemented new training and anti-trafficking procedures, but they have also coached 28 camp officials who will train their colleagues in turn. Furthermore, with U.N. intervention, victims now reside in safe houses instead of being placed in jail alongside perpetrators. With these steps in place, the UNODC has rescued more than 90 victims from the Dzaleka Refugee Camp as of June 2022.

Numerous NGOs are also working on the ground in Malawi. People Serving Girls at Risk (PSGR), for example, cares for women and girls who have faced trafficking or exploitation and handles more than 200 cases a year.

An undercover policeman trained by the UNODC identified and rescued a 16-year-old Congolese girl from forced prostitution. Trafficked at just 10 years old, she came to the camp in 2009 after leaving the DRC due to conflict and violence. At first, she did not trust the officer, but, eventually, he gained her trust. “That evening, I had been beaten by one of my clients for refusing to have sex due to a cut that was bleeding. I was in pain and it was visible. The officer was friendly and he took me to a safe house,” she said to the U.N. Now, she is taking computer literacy lessons and hopes to reunite with her family.