Tag Archive for: Drylands of Africa 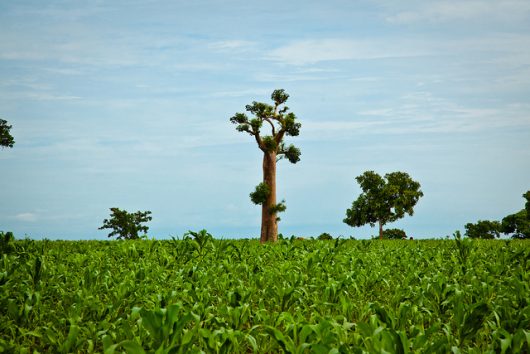 Tree Aid is a little-known international charity based in the United States and the United Kingdom. The organization was founded in 1978 by a group of concerned foresters in reaction to widespread famine in Africa. The original goal of Tree Aid was to provide small-scale support that would be sustainable to their local areas of work.

Tree Aid has not looked back. It estimates that it plants one tree every thirty seconds and has planted more than 15 million trees. The organization currently operates in five countries: Ethiopia, Niger, Mali, Burkina Faso and Ghana. These are a few countries which Tree Aid considers in the “Drylands” of Africa. These areas are under constant bombardment of the desert sands of the Sahara. Around the world, this issue affects 3.2 billion people. In Africa, the desert slowly whittles away at the grasslands. As this happens, the soil loses its nutrients and becomes desert. The process is called desertification.

That is why Tree Aid focuses on planting trees. As a tree’s root system grows, it holds more and more topsoil in place. Trees also help to replace nutrients that soil can lose due to desertification, poor farming methods or natural disasters.

Trees also provide food, which feeds the local populace and acts as a source of income. In a pinch, trees can also be used to make tools, shelter, fire and some medicinal products. Between 2016 and 2017, the charity planted more than one million trees, which helped to lift 400,000 people out of poverty and regenerate 55,000 hectares of land.

Tree Aid does not plan to stop. Its five-year plan (2017-2022) states that the organization wants to plant eight million trees, help to lift 2.5 million people out of poverty, restore 250,000 hectares of land and promote people’s rights to trees. The organization is not going at this alone. RPS, a multinational energy, and resource management company has been working alongside Tree Aid for more than a decade.

In 2016, Tree Aid and RPS were awarded a joint business charity award for their work together. RPS provides more than just money to the organization; it also provides professional and technical expertise such as GIS modeling so that the trees planted by organization can be their most effective.

RPS has pledged more than $500,000 to a Tree Aid project in Ethiopia between 2017 and 2020. The project aims are to educate people and protect ecosystems along the Meki River. RPS also provides funding for other projects.

In 2016-2017 Tree Aid claimed raised $1.6 million through corporate donations, government organizations and private sponsors. However, its total expenditure was $3.6 million. Unfortunately, the organization saw a 41 percent decrease in donations across the board and an increase in the cost of its efforts. This trend is likely to continue but the group does not seem deterred. Hopefully, despite a rising cost of business, this organization will stay rooted and continue to fight the good fight.