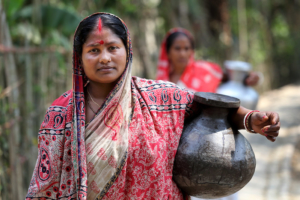 However, the Chittagong Hill Tracts’ 1.6 million people are incredibly water insecure. According to UNICEF’s 2019 report, the region has lower levels of access to water than the rest of Bangladesh. In 2013, 60.5% of Chittagong residents had access to potable drinking water compared to 97.9% of inhabitants of the entire nation.

Unfortunately, water disparity remains an issue as Bangladeshi authorities allocated the majority of funds of their Water, Sanitation and Hygiene (WASH) budget for FY 21-22 to urban areas, especially the capital, Dhaka. Thus, residents of the dry Chittagong Hill Tracts receive scant assistance from their government relative to their city-dwelling neighbors.

In addition to discriminatory government funding, another cause of the Chittagong Hill Tracts’ water crisis is the disappearance of the region’s forests. According to Global Forest Watch, in 2010, the hilly region had 135,000 Kha (521.2 square miles) of forest. By 2021, the region lost 919 ha (3.5 square miles) of woodland.

These dual crises have made water a scarce commodity in the dry Chittagong Hill Tracts. Thus, they have put on a burdensome human toll on the daily lives of the members of the region’s communities.

Voices from the Hill Tracts

Because of insufficient government funding and rising deforestation rates, the region’s main sources of water are running dry. Therefore, many members of the remote communities have to travel interminable distances to gather water.

Aungshaching Murma, a 52-year-old resident of the Rangamati district of the Hill Tracts, has “to walk two kilometres to collect water from the neighbouring village.” According to The New Humanitarian, the water collected from these long and precarious journeys are often impure. The water often causes illnesses because sewage has contaminated it.

Additionally, water security in the dry Chittagong Hill Tracts is seasonally dependent. Babli Tripura, a 19-year-old resident, said to Next Blue, “At this time of the year (the dry season), there is a severe shortage. The village women collect water day and night. It is very difficult to climb the high hills with the water (in pitchers and pots), but there is no alternative.”

During the dry season, water insecurity is especially acute. Women and children often have to gather water and thus are subject to onerous and dangerous conditions. Joshim Uddin, the male head of a family in the Hill Tracts, explained to The New Humanitarian that “Women and children are forced to fetch water from far and wide…Water is available from a nearby spring at other times, but it is not available during the dry season.” Fortunately, there is a potential solution for the dry Chittagong Hill Tracts: Hydram.

Hydram: A Potential Solution for the Water-Scarce Region

According to Dhaka Tribune, Hydram is the result of a collaboration between UNDP Bangladesh Accelerator Lab and Creative Conservation Alliance. It is a “hydraulic ramp pump system” Hydram designed for high-elevation areas like the Chittagong Hill Tracts.

In contrast to many traditional pumps, Hydram can lift water up to 600 feet, according to Dhaka Tribune. The technology also does not require any additional energy sources because it utilizes the energy produced from water traveling downhill. Thus, it is easy to use and environmentally friendly.

Hydram conducted its pilot program in the village of Matamuhuri. In addition to gaining a plethora of technical knowledge, the research team learned that community ownership of the technology was key to its success. As a result of this auspicious pilot project, the Hydram team is currently working on implementing the water pump system in additional villages, Dhaka Tribune reported.

A Promising Future for the Region

Hydram offers propitious signs for the future of the dry Chittagong Hill Tracts. In the case of successful implementation of hydraulic technology in the communities across the region, then the region has the potential to achieve high levels of water security.

With the combined efforts of Hydram and the Bangladeshi government, the residents of the Chittagong Hill Tracts should gain access to sufficient water for drinking, sanitation, irrigation and daily chores. Therefore, a hopeful future for the region is on the horizon.