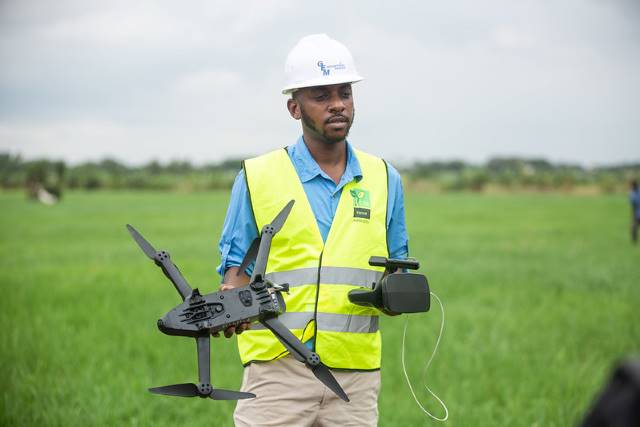 In Africa, farming provides more than 30% of the continent’s gross domestic product and employs more than 60% of the working class. Unfortunately, Africa’s agriculture sector is hurting because environmental challenges have affected the continent’s weather patterns and temperatures, making farming extremely difficult. Outdated practices also hold Africa back, such as planting based on the moon phases, which further affects productivity. These issues bring new challenges to a struggling market trying to provide for a growing population but drones and precision agriculture may be able to help.

According to the Food and Agriculture Organization (FAO), in three decades, Africa’s population will rise to about 2 billion people, requiring the farming sector to grow exponentially to sustain Africa. Luckily, a new relationship has formed between technology and agriculture. Drones and precision agriculture are helping farmers increase food production, protect their crops and protect themselves from poverty.

Over the past couple of years, Africa’s food exports have increased. This rise increases farmers’ productivity, especially those who can grow staple crops, allowing them to sell their produce for more money. Drones and precision agriculture help low-income farmers learn new techniques to keep up with the demand.

While multiple countries have proven the benefit of using drones, African farmers still face a problem. About 26% of African countries have laws about drone usage. Regulations restrict drone use in certain areas, which thus restricts farmers’ productivity. In Mozambique and Tanzania, drones undergo deployment at random to assist small farmers but most drones in Africa monitor wildlife. Increasing beneficial regulations for drone and UAV usage is integral to transforming Africa’s agriculture sector.

Drones and precision agriculture have the potential to revolutionize agriculture in Africa, presenting a way to lift Africans out of poverty.