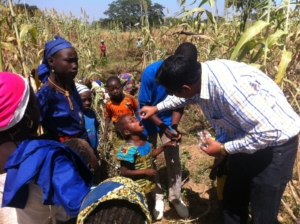 For the last three years, Nigeria has not had one case of polio. As the last country in Africa to still record the wild polio disease, this new health milestone of the eradication of polio in Nigeria has proven the success of public health campaigns for the entire continent of Africa.

The Decline of Polio

Back in 1988, polio paralyzed more than 350,000 children in over 125 countries around the world. Although the devastating disease infected children in almost every country, cases of wild polio decreased by 99 percent after 1988. While the wild polio disease exists in nature, several vaccine-derived outbreaks have occurred in six African countries. In 2012, the World Health Organization (WHO) reported that Nigeria held more than half of polio cases worldwide. Total immunization then became the primary goal for the eradication of polio in Nigeria to ensure that the population has protection from the vaccine-derived and wild virus. Persistent efforts of immunization have helped immunize over 45 million children under the age of 5 in Nigeria. An estimated 200,000 volunteers in Nigeria have aided in giving polio vaccines in the last five years.

At the start of the polio epidemic in Nigeria, 600,000 children did not have the polio vaccine and an estimated 90 percent of polio cases were within northeast Nigeria. Due to this area encompassing largely scattered communities, satellite imaging has aided volunteers with finding unvaccinated children. Vaccinators will also frequently set up clinics within local markets to find all the unvaccinated children.

Many Nigerian women are at the forefront of the battle against polio. UNICEF and the Bill & Melinda Gates Foundation hire mostly young Nigerian women as vaccinator volunteers because Islam is the most prominent religion in northern Nigeria, and it prohibits men that are not family members from entering a Muslim home. The women volunteers go door-to-door to educate families about the vaccine and receive clinical training to give vaccinations.

Today, more than 30 million Nigerian children have received the polio vaccine. The volunteers are also in a continuous battle with skeptical anti-vaccination parents and the militant group Boko Haram. Boko Haram intentionally spreads misinformation about the vaccine and violently targets volunteers in order to keep Islam pure in Northern Africa. Some Nigerian people still have doubts about the vaccine, but now only 1 percent of people refuse the vaccination.