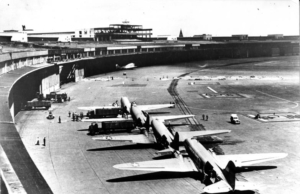 On June 24, 1948, the Union of Soviet Socialist Republics (USSR) cut off land access and power to West Berlin. This act hoped to discredit the U.S. by stranding 2.5 million war-weary people in the American sector without food. American attempts to breach the blockade might have resulted in war, so the Truman Administration circumvented the USSR by airlifting supplies into the city for almost a year. It was a major success. The history of the Berlin Blockade displayed the power of emergency aid and set a precedent for countless American airlift operations.

Following World War II, Germany and Berlin split into Eastern and Western entities. England, France and the U.S. controlled the Western sectors, while the USSR administered the East. Unfortunately, the entire city of Berlin was in East Germany. The Western powers signaled West German autonomy in 1948 by instituting currency reform in their sectors.

The Soviets feared an independent Germany as a threat to its nation’s security. Dr. Armin Grunbacher adds that Soviet leaders wanted to force America to relinquish control of Berlin and discredit them as the Cold War began. The USSR increasingly provoked the West to try and achieve its goals as June 1948 approached. Tensions especially grew during the April Crisis.

A U.S. Army historical report recounts that Soviet provocations led all parties closer to war. On April 5, 1948, a patrolling Soviet jet collided with a British passenger aircraft over Germany and killed everyone on board. The Soviets finally blockaded West Berlin in June 1948, sending American leaders into a panic. Officials questioned if America should risk war with military incursions into Berlin or if there was a better option.

President Truman curtailed initial plans by West Germany’s military administrator, General Lucius Clay, to forcefully supply the city with an armed convoy. It was inefficient and could potentially start a major war. Instead, the Truman Administration ordered Clay to gather American transport aircrafts from around the world for an upcoming humanitarian aid operation. General Curtis LeMay ran Operation Vittles and started airlifting 5,000 tons of supplies every day into West Berlin starting on July 1, 1948.

The U.S. needed to airlift at least 2,000 tons of aid daily to feed everyone. By the end of the airlift, American planes delivered 13,000 tons every day to West Berliners. The breadth of planes utilized and supplies dropped still makes the Berlin Airlift the largest operation of its kind. The success of the aid humiliated the Soviet dictator, Joseph Stalin, and the blockade ended on May 12, 1949.

The U.S. not only saved the lives of millions of people but displayed its immense generosity. Dr. Grunbacher says that the history of the Berlin Blockade showed “the manifested expression of U.S. technical superiority and willingness to defend the ‘Free World.’”

Many airlifts have followed the example of Operation Vittles. A report from the U.S. Air Force accounts for 560 such humanitarian operations between 1947 and 1994. America used emergency assistance to respond to both natural disasters and humanitarian crises in this period.

For example, the 1977 Turkish earthquake killed 3,600 people and left 50,000 homeless. The USAF was quick to respond and airlifted 606 tons of tents, blankets and food to accommodate those affected. The U.S. also participated in the 1994 Rwandan Genocide Relief, nicknamed Operation Support Hope. U.S. planes deposited 3,600 tons of supplies at refugee camps in neighboring nations for fleeing Rwandan refugees.

The history of the Berlin Blockade resonated as late as 2014 when the U.S. airlifted food and water to Yazidi Christians trapped on Mt. Sinjar in Iraq. The Islamic State had assaulted surrounding villages in the area and massacred members of the ethnoreligious minority. American intervention bought the Yazidis vital time. More than 114,000 meals and 35,000 gallons of water dropped sustained Yazidis until most escaped the mountain.

The history of the Berlin Blockade displayed the potential for emergency aid to assist millions of people and avoid violent conflict. It also showed that the reputation of the U.S. benefits from humanitarian operations. The precedent set in 1948 spawns new operations every year and it shows no sign of stopping.