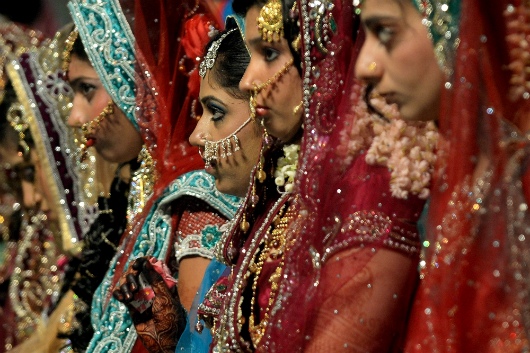 A dowry is the money or property that a woman brings to her husband’s family at the time of their marriage. Traditionally, dowries in India were meant to ensure that the bride was financially secure after her marriage and was seen as a type of inheritance from the bride’s parents to the bride. However, when the British colonized India, this changed. Heavy taxes meant that many families who had sons began to rely on the bride’s dowry for survival, and the husband’s family began to extort more and more money from the bride’s family.  Providing a dowry was officially made illegal in India in 1961 with the establishment of the Dowry Prohibition Act, but many families among all social classes continue the practice of giving a dowry today. Dowry killings are when a wife is killed because her parents are unable to fulfill all of the demands of the husband’s family, and these killings are unfortunately extremely common.

In the 1990s, dowry killings were not very common, with about 300 killings per year. However, with the rise of consumerism in India, dowry killings have increased. Now, goods and appliances that were originally scarce have become more widely available, prompting a wave of greed and increasing the demand for dowry. Families that previously could not have dreamed of being able to afford goods such as cars are now within reach of being able to buy one, and they rely on the bride who marries their son to help them fulfill their consumption desires.

Pravartika Gupta and her one-year-old daughter were killed by her in-laws in 2012 because Gupta’s parents were unable to afford the 15,000 pounds, Honda City car and new apartment that had been demanded as a dowry. Gupta’s case is unfortunately not unique. In 2014, 22-year-old Annu Devi and her one-year-old daughter were burned to death by Devi’s husband and in-laws because her parents were unable to pay the dowry demanded. Many in-laws continue to demand more and more dowry even in the years after their son is married, claiming that the dowry will be used to provide for children and pay living expenses throughout the years. Around 80% of bank loans in India are taken in order to meet dowry-related demands.

Dowry is also the reason for the high levels of female feticide in India. Parents kill their female babies in the womb because they do not want to spend their whole lives saving money to pay for their daughter’s dowry. This has led to a skewed gender ratio in India, where there are 933 girls per 1,000 boys.

In 2012, charges were brought in 94% of dowry-related death cases, but only 32% of cases led to convictions. Many husbands and in-laws claim that dowry-related deaths were suicides in order to escape conviction. Parents of the bride are also sometimes reluctant to bring charges against the husband’s family because they do not want to ruin their other daughters’ chances of marriage.

India has one of the fastest-growing middle classes in the world, and it has had a female president and a female prime minister. It is now common for women in India to have impressive careers. However, India still ranks as the world’s fourth most dangerous country for a woman. If India wishes to really advance, it needs to ensure that harmful practices such as dowries are not just legally unacceptable, they are also socially unacceptable.