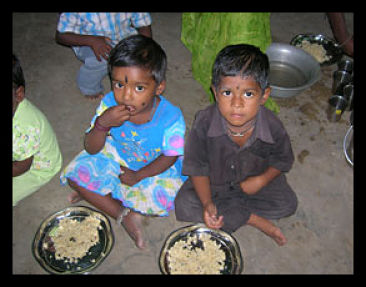 Because salt is nearly universally used as a condiment, it represents an excellent avenue by which to affect the diet of almost any population. With this in mind, the addition of essential nutrients to salt is seen as an effective way to combat micronutrient deficiencies worldwide.

The concept of fortifying salt with both iodine and iron was first conceived in 1969, but it took years of research and technological advances to make the process possible. When both iron and iodine were first added to salt, multiple obstacles presented themselves. These included the instability of iodine compounds when combined with iron, the oxidation of iron, and the development of unappealing color in the salt. Decades later, after these issues had been carefully addressed, Double Fortified Salt was born.

The Micronutrient Initiative partnered with the University of Toronto to conduct groundbreaking research funded in part by the Canadian International Development Agency and the World Bank. This research produced a method by which salt can be effectively fortified with both iron and iodine without compromising the product. One of the most exciting details about this initiative is the price tag. At roughly 18 to 20 cents per person per year, double fortification of salt will inevitably save money by preventing many of the health complications that accompany iron and iodine deficiencies.

Of course, the final judge of the product is the consumer. If no one wants to use the amazing new salt, its effectiveness is irrelevant. Once tests had been done to ensure the stability and efficacy of double fortified salt, consumer surveys were conducted in Nigeria and Kenya. These tests confirmed that consumers found the product acceptable, giving the Micronutrient Initiative and its affiliates the green light to move forward with large-scale production. Commercial production in India was met with success, and other countries, such as Bangladesh, have since joined the initiative.

Salt is fortified with iodine fairly consistently, with roughly 70% of people worldwide consuming iodized salt. However, inadequate iodine consumption is still the leading preventable cause of brain damage in the world today, and universal salt iodization is the most effective way to ensure that those at risk are receiving enough of this essential nutrient.

Meanwhile, iron deficiency is the most common nutritional deficiency in the world today, and it has terrible consequences. Iron is instrumental in blood formation and a lack of it often causes blood hemoglobin levels to plummet, a condition known as anemia. An estimated 2 billion people worldwide suffer from anemia. Almost half of all women in developing nations experience iron deficiency that can cause complications in pregnancy, low birth weight, and infant and maternal deaths.

The capacity to fortify salt with both iron and iodine is an opportunity to fight poverty on many fronts. Decreased incidence of iodine deficiency will prevent 18 million children from being born mentally impaired each year and will improve the overall of health of many more. Iron supplementation will improve maternal and infant health, and protect multitudes of people from developing anemia. These enhancements in health will correspond with higher quality of life for billions of people around the world.