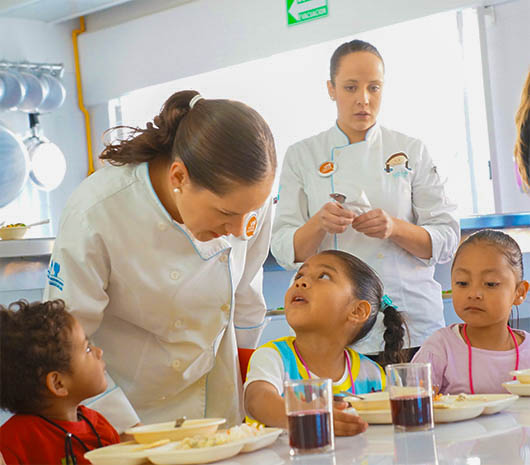 Ending child malnutrition in Mexico is the main goal for the “Va por mi cuenta” (“It’s on me”) movement. They serve more than 20,000 meals per month to children living under vulnerable conditions.

As of today, the “Va por mi cuenta” movement has four “Nuestro Comedor” dining rooms located in the state of Mexico: in Metepec, Chalco and Ecatepec. The fourth dining room is located in Mexico city.

The movement plans to collect a minimum amount of 100 million pesos during a period of 5 years in order to construct ten “Nuestro Comedor” child dining rooms. According to the movement’s website, these dining rooms will provide 2,530,000 meals and feed 2,300 children daily.

“Va por mi cuenta” has the support of different companies, brands, and restaurant chains that, through different mechanics of collection, provide help advance the movement’s prospects.

Some of the brands that collaborate with “Va por mi cuenta” are Alsea, Starbucks, Burger King, Domino’s, PayPal, Flock, X Design, California Pizza Kitchen, Chili’s, and Pei Wei, among others.

Alsea is the responsible for addressing and responding to the concerns and requirements that participants may have. Alsea is also responsible for coordinating the movement’s partnerships.

This foundation canalizes the funds raised by the movement into the construction and operation of “Nuestro Comedor” dining rooms, and it monitors and reports results.

The fast food restaurant chain, Burger King, has also partnered with the “Va por mi cuenta” movement. All Burger King locations in Mexico support the movement by making a donation for every single ice cream cone the restaurant sells.

Domino’s, the pizza restaurant chain, also contributes to the movement. Domino’s Mexico locations allocate a percentage from the sale of two of their products to the “Va por mi cuenta” movement.

Domino’s also contributes to the movement by encouraging Mexican artists to contribute their own designs for pizza and “Canelazo Bites” boxes. Notable Mexican artists that have contributed to this project and the “Va por mi cuenta” movement are Kari Mayo, Jorge Tellaeche, and amoATO Studio.

By visiting the restaurants that have signed on to help the “Va por mi cuenta” movement, consumers are also becoming a part of the effort by contributing their purchases.

Individuals could also independently contribute to the cause by making donations through Banco Santander, or by contributing an “invite” to meals via PayPal.

The “Va por mi cuenta” movement is fighting to eradicate child malnutrition in Mexico. By constructing “Nuestro Comedor” dining rooms, and with the help of different brands, restaurant chains and corporations, the movement is little by little making a greater impact on Mexican children who suffer from malnutrition.

After looking at other, more crowded markets, Domino’s brand pizza has decided to open a franchise in South Africa, saying it is a brand new and lucrative market.

Domino’s Pizza, which recently opened a chain in Nigeria, is now planning to produce more pizza in Africa by opening chains in South Africa. Taste Holdings has now entered into a 30-year agreement to open stores in South Africa, as well as Swaziland, Mozambique, Zimbabwe, Lesotho, Namibia, Botswana and potentially Zambia and Malawi.

Domino’s is one of the largest pizza delivery brands in the world.  It has nearly 11,000 outlets and has stores in 70 different countries, and now those countries will include South Africa.

“We are looking at opening five or six stores [for Domino’s Pizza] this year,” said Jean-Claude Meyer, Domino’s Pizza CEO, in an interview with How We Made it in Africa.

However, the expansion of their brand is spreading a lot slower than KFC, with only four stores in the market so far.

“Let’s face it, KFC has gone much faster than we have.  I don’t believe we will be at 23-25 stores after three and a half years, but that is not our goal. KFC is selling chicken and chicken is an obvious seller in Africa. But pizza is not the same and we are still in the process of educating people a year and a half after rolling out[…]” Meyer said in an interview with How We Made it in Africa.

Domino’s Pizza will be partnering with pizza brands in South Africa that are already established and remodeling some of their stores. However, even though they are buying out some of the Scooters and St. Elmo’s Pizza stores, they plan to keep the local favorites.

“We’re very excited to be working alongside our new partners in establishing Domino’s as the preeminent pizza brand in South Africa and in the other markets where Taste Holdings is already established,” said Ritch Allison, Domino’s Pizza executive vice president of international in an interview with Yahoo! Finance.

In addition to keeping the favorite pizzas of the previous brands from South Africa, Domino’s plans to “Nigerianize” its products and create a special menu geared towards the tastes of their new customers.

“We have been able to roll out a couple of pizzas, for example the Chicken Suya pizza, which is a good seller and accepted very well in the market here,” Meyer said in an interview with How We Made it in Africa.  Domino’s is also offering Jollof rice, a popular West African dish, as a pizza topping.

Domino’s decision to enter the market of pizza in Africa will be beneficial to both the company and the people of South Africa.

“We looked at markets around the world, and there are very few markets…where the number one or two positions isn’t occupied by Domino’s or Pizza Hut…We would certainly rather be trading under a global brand, than a local brand,” Meyer said.

Domino’s decision to open its franchises in many different African countries will bring more jobs to the country and aid in diminishing global poverty over the next 30 or more years.  Their decision also helps them become better known in a market where they have previously been unheard of; it also helps them spread their brand globally.