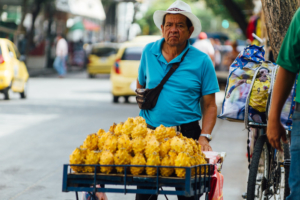 In collaboration with the Colombian government, the World Food Programme (WFP) created a pilot program in August 2021 to help fight poverty and food insecurity in Colombia. The country faces significant struggles due to the pandemic and rising tension with the government, increasing the number of those in poverty over the past year. The program hopes to help people in Colombia obtain more access to food for their families, as food security is a particular struggle, especially over the past 15 months or so.

Since the end of April 2021, more than 50 people have died during protests across Colombia. At first, the demonstrators opposed a tax reform lowering the tax thresholds of salaries. As such, any individual earning 2.6 million pesos (roughly $684) or more per month is subject to tax. Furthermore, many tax exemptions would disappear and there would be an added increase in taxes for businesses. The aim of the reform was to help the economic fallout caused by the COVID-19 pandemic. Thousands of people protested, and after four days, President Iván Duque finally declared that he would withdraw the bill.

However, the protests did not stop there. There was significant police presence during the marches as a court order prohibited protesting due to the risk of spreading the COVID-19 virus. Human rights groups say riot police had used tear gas and even live ammunition to disperse protestors. Evidence from social media show violent clashes, and now, many have lost their lives. Demonstrations have only strengthened as anti-government protests continue since November of 2019. More than 2,300 citizens and members of security forces were injured as the protests persisted.

Protests, led by the National Strike Committee, go on for several reasons, but the main issue igniting outrage among citizens was “the actions of riot police.” Protests against the police began long before the pandemic as tens of thousands marched in 2019 after the death of Dilan Cruz, “a teenager who was hit by a projectile fired by riot police at an anti-government protest.” The protestors want the riot police to disband and security forces to have more accountability. However, the president does not currently plan on disbanding the riot police.

Poverty in Colombia is another significant problem as the pandemic pushed more than 3.6 million people into poverty. In some cities like Quibdó, the number of people experiencing extreme poverty rose to 30% and in the supposed “economic powerhouse” of Colombia, Medellín, the rate of extreme poverty is now 9%. Indigenous groups joined the protests against inequality and the riot police as they were hit the hardest due to violence in rural areas. Before any progress can be made, President Duque said protestors must lift all roadblocks as the barriers have already caused significant damage to the economy. On May 28, 2021, the president said “he would deploy 7,000 troops to clear main highways.” Duque ruled out the protesters’ main demand of dismantling the riot police so it is likely that protests will arise once more.

Help From the World Food Programme

The WFP and the Colombian government are fighting poverty in Colombia through the pilot program, expanding the national social protection system to include migrants and vulnerable host communities. The assistance “included cash transfers and in-kind food distributions aimed at more than 72,000 vulnerable people, among them Venezuelan migrants, Colombian returnees and vulnerable Colombians.”

The WFP and the Colombia Administrative Department for Social Prosperity worked together to fight Colombia’s poverty crisis. The cash transfers from the WFP “aligned with the emergency social protection programs provided by the Government of Colombia, to ensure consistency with the national social protection system.” The WFP could obtain important information from the national social registry to better understand where to efficiently use its resources. Poverty in Colombia continues as a significant concern, but the program provides hope, alleviating food insecurity for thousands of families.