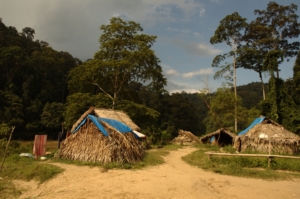 In this age of rapid digital evolution, ensuring widespread access to information and communication technologies (ICTs) has become a serious goal for countries seeking economic modernization. And Malaysia is no exception. Efforts to increase digital inclusion in Malaysia are well underway.

Malaysia’s National Information Technology Council invests in building communications infrastructure in remote rural areas, including lands inhabited by peninsular Malaysia‘s Orang Asli indigenous people. The scope and expense of this task has raised questions regarding the practicability of installing effective communications infrastructure in outlying areas, and large segments of marginalized populations remain without digital access. However, Malaysia persists in its commitment to expanding ICT access and receives assistance in this regard from multinational conglomerates such as the Samsung Group.

Orang Asli, meaning “original people” in Malay, is an umbrella term encompassing the indigenous people of the Malay peninsula in modern-day Malaysia. These peoples comprise 18 distinct groups, together constituting half a percent of Malaysia‘s population. Such communities are more likely to live in remote rural regions.

As an impoverished minority, nearly 30.8 percent of Orang Asli are illiterate compared with only 8 percent of the total Malaysian population. Access of Malaysia’s Orang Asli to digital technology is more limited than in neighboring populations.

A study published in 2011 revealed that within the indigenous Semai population of Kampung Bukit Terang, only 5.2 percent were computer literate. This study’s outcome can be attributed to the remoteness and low educational and socioeconomic outcomes of these groups as compared with urban and non-indigenous populations within the country. The authors of the study recommend proactive policies, such as direct provisioning of technologies to remote communities, to expedite these communities’ integration into the digital economy.

Yet, access to modern technology may inadvertently corrupt centuries-old traditions, flattening uniqueness and disrupting continuity with the past. This threatens to irreversibly alter the identity of indigenous peoples, even to the extent of assimilation and loss of traditions. However, these potentially negative consequences do not necessarily outweigh the potentially positive consequences.

Promoting and Preserving the Culture

Through scientific polling, the Department of Social and Development Sciences of Universiti Putra Malaysia’s Faculty of Human Ecology uncovered that only 20.7 percent of Malaysia’s Orang Asli used ICT to spread cultural awareness to others and preserve their heritage. As of November 2015, two Facebook pages operated to promote indigenous culture, according to the nonprofit organization Gerai Orang Asli.

According to Dr. Sarjit Singh, particularly the young Orang Asli, as shown by their enjoyment of cyber cafes, are enthusiastic about the prospect of increased online access. The young are quick to master new technologies, and Dr. Singh suggests that authorities prioritize the installation of relevant technologies in schools wherever possible.

Programs initiated by the Samsung Group in Orang Asli regions have highlighted the adeptness and eagerness of Orang Asli youth in adapting to new technologies. For instance, in 2015 Samsung Malaysia Electronics sponsored a trip for Orang Asli children to a Malaysian amusement park, designing activities that required the youths to use smartphone technology. In affirmation of the possibility of coexistence between modern technology and the preservation of traditional lifestyles, a tree-planting followed these technology-centered activities.

In a separate initiative, Perak saw the establishment of a Samsung Smart Community Center in Perak providing improved digital access, products and an air-conditioned learning space to people in deprived areas. The Chief Minister of Perak expressed his hope that these investments will bolster the Malaysian government’s economic goals and lift these communities out of poverty.

The government, in conjunction with multinational corporations such as the Samsung Group, has made progress in expanding digital inclusion in Malaysia. Obstacles remain because of the remoteness and relative poverty of these populations, but such impediments are overcome rather rapidly alongside the development of these technologies.

While the impact of digital technology on indigenous traditions and identity remains a concern, there is room to use digital technology in the preservation and promotion of these unique cultures. Though statistics gathered in prior studies confirm low rates of access to Malaysia’s Orang Asli to digital technology, if efforts persist, improvements will continue. As digital access and literacy continue to rise, poverty and marginalization will be conquered gradually, meaning that there is reason for optimism regarding the future of the Orang Asli in a modern economy.