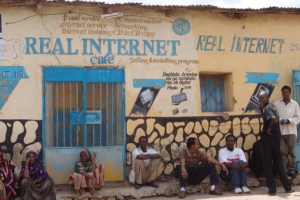 In 2020, less than 19% of the Ethiopian population had access to the internet. The Ethiopian government widely owns Ethiopia’s internet and telecommunications systems, which has been the source of much criticism. The Addis Ababa Chamber of Commerce itself noted that the lack of liberalization in the telecommunications and digital sectors limits competition and dampens efficiency, ultimately stalling the development of the nation. Given that it is one of the fastest growing economies in Africa, Ethiopia’s comprehensive strategy, Digital Ethiopia 2025, has significant plans to bring the country fully into the modern age.

The Digital Landscape in Ethiopia

People in Ethiopia have very limited internet access. On one hand, the infrastructure is not widely organized or well-oiled; outages occur regularly. The cost of an internet package surpassing the actual income of a household is not uncommon in the country. Internet cafes, or hotspots where people can access the internet, are many Ethiopians’ best hope for a fast and reliable access. Hubs are typically located in Ethiopia’s bustling urban regions.

On the other hand, barriers to access are not just structural, but also political. The Ethiopian government’s monopoly on Ethio Telecom has made it difficult to manage access for the entire country. Whatsmore, the state has periodically shut down internet access for political reasons, such as in the aftermath of Āmara president Ambachew Mekonnen. The government’s strict control over telecommunications in Ethiopia not only limits the possibilities of nationwide commerce but also disconnects Ethiopia’s economy from the rest of the world.

The goal of this new digitization strategy is to bring technology to the people of Ethiopia, as well as to its industries. Digital Ethiopia 2025 focuses on e-commerce and the ability to digitize services in traditionally non-digital industries, like agriculture and manufacturing. Utilizing modern technology to operate in these spaces will create room for investment in agriculture technology. Digitization in the public sector, such as the implementation of a national ID database, would mean a boost in efficiency as Ethiopians all around the country connect to the internet through one streamlined system.

The other big push that Digital Ethiopia 2025 is championing is the privatization of the telecommunications sector. The government’s explicit control over media and news, internet traffic, and trade via telecommunication not only pose threats to privacy but also limits competition. The original plans to sell a large stake of government-held Ethio Telecom ended up on hold in May 2020, largely due to economic shifts as a result of COVID-19. However, moving forward with plans will likely be the key to advancing the market capacity of Ethiopia’s telecommunications sector and the economy as a whole.

Digital Ethiopia 2025 is Ethiopia’s first major step towards a more connected and efficient economy, as well as towards more protections for Ethiopians and their access to information. These efforts are critical to modernizing the economy and creating a self-sustaining digital sector.