In 2017, around 60% of the population in India faced poverty, with around 1.3 million people living on less than $3.10 a day. India is one of the most populous countries, right behind China. As the COVID-19 pandemic swept through the nation, India was hard hit by the pandemic. The International Labor Organization (ILO) has estimated that with the economic halt in India, around 400 million people are at risk of falling into poverty. As people struggle with access to food and healthcare services, digital and technological resources are being  implemented to reach those most at risk. The COVID-19 pandemic has necessitated the use of telehealth in India.

Telehealth in India has had a substantial impact on communities. Following the COVID-19 outbreak, the Indian government initiated telemedicine to help healthcare professionals reach everyone in need, even those living along the lines of poverty and those in rural locations. Telehealth in India gives the poor a chance to receive adequate healthcare without an in-person visit, especially during the COVID-19 pandemic. India has made great strides in improving technological resources in the country. With these resources being improved, telemedicine can bring specialized care to even the most remote places in India.

There have been recent technological advances within India, such as the proliferation of fiber optic cables and the licensing of private internet service providers. These new technological advances have encouraged the Indian Space Research Organization to set up an exclusive satellite called HealthSAT that can bring telemedicine to the poor on a larger scale.

A telemedicine system in a small health center consists of a computer with custom medical software connected to essential medical diagnostic tools. Through the computer, digitized versions of patients’ medical images and diagnostic details are dispatched to specialist doctors through the satellite-based communication link. The information is received and examined to diagnose and suggest appropriate treatment through video-conferencing. With all of these services being offered, reaching the poor in the most remote places has become more of a possibility.

The Impact of Telehealth

Though the COVID-19 pandemic has brought about negative effects for India, it has also compelled India to utilize more digital and technological resources to expand its reach. Telehealth in India has brought some relief to overburdened healthcare systems, relieving the pressures of increased caseloads due to the pandemic. Medical centers now have the ability and capacity to reach long-distance patients. The Indian government issued the Telemedicine Practice Guidelines in March 2020, allowing for registered medical practitioners to provide healthcare services using telecommunication and digital technologies.

The Future of Telehealth in India

Telehealth in India is bringing about new growth within the medical arena. The prolonged pandemic and the absence of a vaccine means telemedicine and telehealth services are integral and will be useful for the foreseeable future. Not only will the middle-class and the wealthy have access to healthcare but healthcare services will also be able to reach the poor in the most remote places. 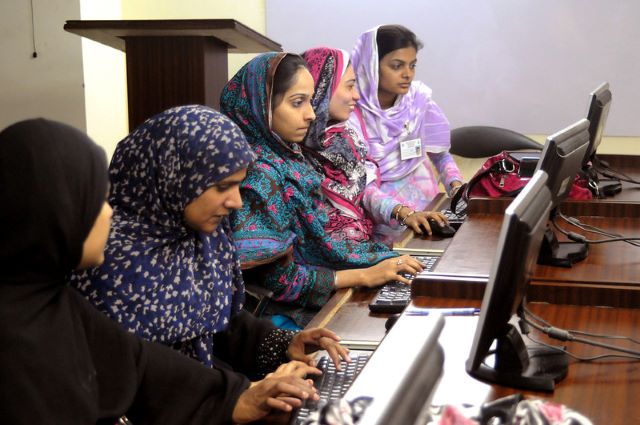 In the wake of COVID-19, economies across the world have been hit hard. Countries alike have seen decreases across all economic sectors as quarantine and stay-at-home orders were mandated in an effort to slow the spread of the virus. People transitioned to working remotely, while millions of others lost their jobs entirely due to market crashes. In an effort to cushion the economic travesty that the pandemic has bought, Microsoft is launching a global initiative, partnering with LinkedIn and Github, to teach 25 million people across the world new digital skills. Microsoft’s global skills initiative aims to remedy the global economic impact that has come with COVID-19.

Microsoft believes these newfound digital skills will give people the ability to take on jobs where digital skills are necessary in order to be successful. The initiative targets those who have lost jobs due to the pandemic, as well as minorities, women and others affected by poverty.

Recent statistics predict that over 250 million people globally may be unemployed by the end of 2020 due to COVID-19. Microsoft found that in the U.S. alone, in May 2020, women had an unemployment rate of 14.4% compared to men who were at 12%. Additionally, Latinx populations had unemployment rates of 16.7%, which is much higher than other groups. These statistics indicate why the initiative particularly targets populations such as women and minorities.

By learning digital skills, those who are at an economic disadvantage will be able to take on jobs in the digital age and improve their economic status. Those who attain these newfound skills might even be able to teach others and distribute their knowledge to uplift an entire community.

The three partnered companies have come up with a three-step process that they hope will encourage economic growth in communities across the globe. The first part relates to the Linkedin Economic Graph. The Economic Graph is a digital representation of the global economy based on more than 690 million professionals, 50 million companies, 11 million job listings, 36,000 defined skills and 90,000 schools. In short, it is data that shows available jobs and their required skills as well as global hiring rates. These insights will help create economic opportunities for the global workforce.

The second part consists of free tools, programs and content that people will be provided with, in order to learn the skills necessary for job applications. This initiative will give people free access to content from LinkedIn Learning, Microsoft Learn and the GitHub Learning Lab.

Thirdly, low-cost certifications and other cost-free job-seeking tools will be available to help people pursue new jobs with their newly developed skills.

Along with this digital skills initiative, Microsoft will be backing $20 million worth of cash grants that will be distributed across the globe to different nonprofit organizations. These grants will help nonprofits to combat the effects of the pandemic and allow the nonprofits to further extend reach in order to help more people.

Microsoft believes that global shutdowns and social distancing have accelerated the path to digitalization in all fields and economies. The company knows that digital tools are now necessary regardless of the field of work and will continue to be relevant far after the pandemic has passed. Microsoft’s global skills initiative may help the world’s economic recovery and may possibly uplift the entire globe during the COVID-19 pandemic.