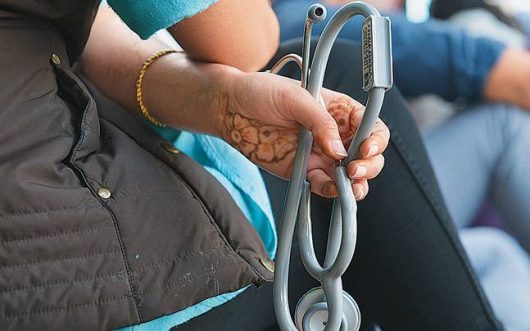 Yet with the strained healthcare system in India, diabetic retinopathy often goes untreated until it is too late. The doctor-to-patient ratio is tremendously low, with only one doctor for every 2,000 people. Artelus can take away the burden of diagnosing from doctors, allowing them the time to focus on treatments rather than examinations. This AI captures the patient’s retina image, analyzes it in less than 15 seconds and then prints the results.

Similarly, 70 percent of the Indian population lacks health insurance. This leaves billions unable to afford healthcare. Artelus is an affordable and accessible screening tool that provides results fast. With over a 93 percent accuracy rate, patients without health insurance save money on examinations and will be certain of when they need to spend money on treatment.

But how does the product work? The AI utilizes technologies like portable devices, cloud computing and deep learning. Deep learning uses algorithms inspired by the complex neural systems of the human brain. Thus, the AI will grow to perform better the more data it is given.

With the success of their first product, Artelus seeks to expand their AI screening tools even further. They are looking not only into preventing blindness in India through their diabetic retinopathy screening, but also plan to develop screening tools that can detect early tuberculosis, breast cancer and lung cancer. The company began with the dream of marrying AI with healthcare and look to be steadily on the way to accomplishing their goal, starting with the revolutionary Artelus.