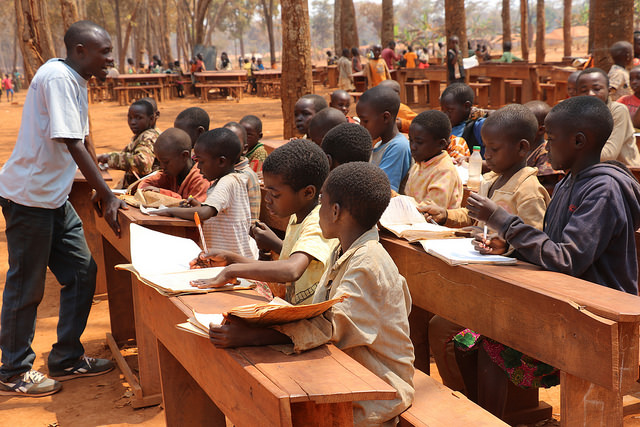 In a perfect world, education would be free and easily accessible for citizens of all countries. As education seems to be unattainable for a lot of people in certain countries, there are a lot of people and organizations that want to help, but just do not know how or they  may not understand the many obstacles to obtaining an education. Here are 10 obstacles that citizens around the world struggle with when trying to obtain an education.

Classrooms
Finding an adequate space to teach students can be one of the major issues countries find when looking to start a school. Often, without a large enough teaching space, there are overcrowded classrooms or teachers are forced to teach outside, in which case they are not in a proper learning environment. The existing classrooms and buildings are sometimes poorly built and falling apart, lacking proper facilities such as toilets and water.

Learning Materials
Tools and materials students need access to in order to have a decent education are hard for them to obtain, often because living in poverty means that their families simply cannot afford them. A lot of textbooks are old and in bad condition and may be shared by six or more students. Not only do the students need proper materials, but the teachers often lack these supplies as well. Lesson plans and chalkboards may seem like basic materials, but a lot of countries lack these essentials for the classroom.

Expenses
Fees for tuition, school uniforms, transportation, supplies and any other fees add up very quickly. For families living on a low household income, this means that school is not an option for them; aside from this, these families often require their children to work instead of spending time in school.

Gender
Females are about two and a half times more likely to not attend school than males in conflict-affected countries. Therefore, even being born a female can prevent a student from obtaining an education. Often times this is due to the risk of a violent attack when attempting to attend class, an early marriage or pregnancy or discrimination. Some countries discriminate against women and girls from going to school because of longstanding social beliefs that men dominate women.

Rural Living
Children and students living in rural areas are at a disadvantage when it comes to their education. The distance is much farther than those who live in the city and closer to the schools, and it can be hard to find proper transportation to and from class.

Funding
A lot of poor countries do not receive enough government funding to establish a school, and often, the existing schools are not well built or sanitary. In some instances, there are not even private restrooms for females to use and this can prevent them from attending school.

Disabilities
Developmental disabilities are common of children in developing countries. Due to these – often cognitive – disabilities, families often suffer from an economic and social disadvantage. These children may not be able to learn and retain information properly, and therefore may have a hard time keeping up in school. This can prevent the child from attending school in general.

Teachers
Filling teaching positions is one of the many educational obstacles that countries face. Unfortunately, for there to be universal primary education, there would need to be 28.5 million new teachers by the year 2030. A lot of educators are given a class that contains way too many kids, with a variety of languages being spoken and not many materials to use.

Hunger
Malnutrition is known to make children very ill and hurt their immune system. Hunger can also cause things like anxiety and depression as well as behavioral problems, which can result in difficulty focusing. Not eating enough can impair childrens’ development and their achievement and can cause psychological problems.

War Zones
Education becomes less important when living in a war zone. An estimated 28 million children – 42 percent of the world’s total – do not have access to education, as they are living in war zones. Governments often donate and help with food, water and shelter, as the primary needs during an emergency, and education is an afterthought.

Although there are many obstacles prohibiting educational attainment around the globe, many of them can themselves be prevented. There are so many different organizations that people throughout the world can choose from to contribute their time to or donate to. Save the children, an organization founded in the U.S., was able to help over 13 million children receive an education in 2016. This is evidence that our donations and contributions through charities are indeed effective and changing lives, and that we are able to tackle these obstacles one by one.