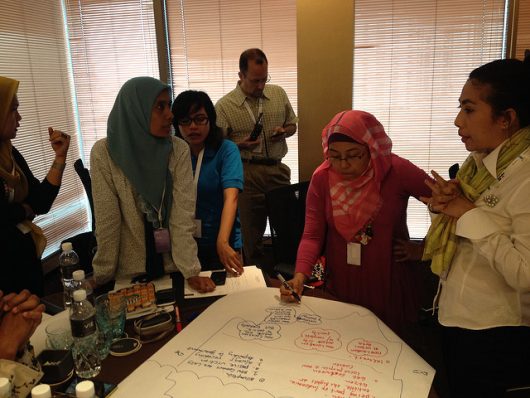 Indonesia, a country known for its large economy and diverse population, is home to 243 million people. Previously, the country dealt with an autocratic leader and has had many issues with corruption. However, the country’s newest president, Joko Widodo, wants to make the country more democratic. With poverty affecting 11 percent of the population and many people living in “near poverty”, several development projects in Indonesia have been working toward solutions.

Here are five development projects in Indonesia that are addressing different issues in order to make the country better for its citizens.

PNPM Mandiri works within the poorest communities in Indonesia to help develop villages. By engaging in these projects, community members have access to employment and help their community’s infrastructure. It is a flagship community organization for the government. The program also teaches others how to plan communities and apply the practices elsewhere in Indonesia. The program is now operational in 70,000 communities throughout 33 provinces.

As a way to invest in communities, the Asian Development Bank (ADB) started a microfinance program to help small businesses in North Sumatra. The program was originally intended to help businesses after the 2004 earthquake and tsunami. Instead of having a bank, representatives visit communities and give presentations where business owners can get loans. This enables businesses to expand and allows people to get loans that they thought they could not have gotten before. The microfinance program provides “finance that changes lives.”

The MRT is an infrastructure development project aimed to relieve traffic congestion. It is being built by the Jakarta government and it will be completed in 2027 with a construction cost of over $1 billion. This project is going to impact almost 500,000 people daily so they can travel efficiently to their jobs and improve the economy.

Similar to the ADB microfinance program, IFAD invests in the rural sector. IFAD focuses on investing in remote and vulnerable areas. It has invested over $400 million into Indonesia since 1980 and helps establish public-private partnerships. It places an emphasis on smallholders in these communities.

The Legal Empowerment and Assistance for the Disadvantaged (LEAD) Project

This program works to ensure that the most marginalized in Indonesia are given the proper rights and treatment. The LEAD Project aims to spread awareness of legal rights regarding government services and legal claims. As a result, policies have been strengthened and government officials have been more responsive to marginalized communities claiming rights and bringing up legal issues.

Indonesia has issues that span the rural and urban areas as well as in the spheres of legal and human rights. These 5 development projects in Indonesia will benefit the people as the country continues to progress.