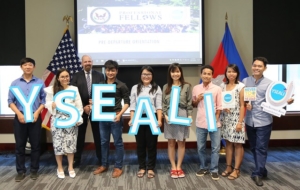 The purposes of embassies around the world are to represent different country’s governments in another country and facilitate relationships between them. It is the responsibility of government agencies to address current global issues. As a result, many embassies assist in development initiatives in the countries they are based in. Embassies do this in many ways, especially through collaborating with local organizations, sponsoring organizations or creating new embassy-based programs. Below are two of the most sustainable and beneficial programs that the U.S. embassy works on in Cambodia.

Women run 65 percent of the micro-businesses in Cambodia and most of those businesses do not have the resources or the engagement to propel them to their higher potential. In fact, women only account for one percent of formal business owners, whether small or large businesses. The mission of SHE Investments is to support women business founders in a male-dominated industry with the goal of impacting Cambodian communities both socially and economically.

SHE investments started as an idea in 2013 and fully launched in 2014. USAID Cambodia sponsors this organization through the Development Innovations (DI) Cambodia project, one of the programs through the U.S. Embassy in Cambodia.

In 2016, the organization applied for the DI grant through USAID. SHE Investments received a small grant that went towards the development of Ngeay Ngeay, a free database to help women-led businesses register with their local government agencies, such as the Ministry of Commerce. This helped to transform the organization’s possibilities with technology because it had not tried to utilize those resources to the fullest extent prior to the grant. The DI grant also provided workshops in social media and branding, which opened the organization’s network to different corporate partners.

“I didn’t have any skills for video before. It looked really hard. But [the DI trainers] made it really simple for someone who has never edited before,” said Seng GeachLeang, the Communications and Community Engagement Officer.

With the support of USAID and the programs through the U.S. Embassy in Cambodia, SHE investments was able to expand its inaugural program, the SHE Incubator Program. It works to assist micro-businesses with five paid employees or less in order to give them personal training and preparation for running a larger scale business one day. The workshops, delivered over the course of six months, are in the Khmer language.

In order to create sustainable change, SHE investments tracks the growth of the small businesses over time to determine the impact of their assistance, whether or not there is an increase in household income, women’s empowerment and comfort with decision-making as a result of their assistance.

Another one of the programs through the U.S. Embassy in Cambodia not only reaches the country’s own youth but also those in neighboring countries. The Young Southeast Asian Leaders Initiative (YSEALI) supports and provides opportunities for youth across all Southeast Asian countries.

In 2013, YSEALI began its movement to engage young adults from 18 to 35 years old in leadership development and relationship making. The program is unique because it connects young adults from different countries in the region with each other. This is to promote unity and belonging as well as strengthen diplomatic ties between Southeast Asia and the U.S.

The leaders can apply to become members at any time. Once in the group, they focus on topics and issues that youth in the regions determine themselves. This has included but has not limited to, professional women empowerment, food security and foreign relations. Programs within YSEALI include professional and academic fellowships to the United States, regional workshops and grant funding.

It is evident that the benefits of YSEALI are on an even larger scale than it seems. According to the Huffington Post, during the 2015 and 2016 academic year, over 55,000 Association of Southeast Asian Nation (ASEAN) students studied in the U.S. and their economic contribution to the U.S. economy was $1.7 billion. This mutually beneficial relationship ensures the prioritizing of the future of personal development of ASEAN youth. These young adults are the future change-makers in their region of the world.

Still, including these programs, there are a number of other programs through the U.S. embassy in Cambodia and each is unique. Many of the programs provide avenues of support for young adults as they make up approximately 65 percent of people in the Southeast Asian region. With the help of organizations and programs like those in this article, there are opportunities to make lasting change for the better in Cambodian communities.