Tag Archive for: Desertification in China 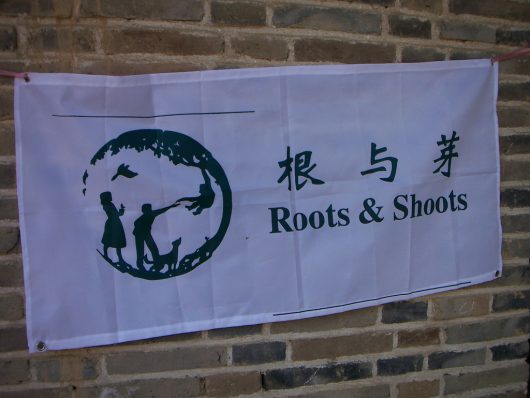 Desertification has been a prolonged, aggravating problem in northern and northwestern China. The Roots and Shoots (R&S) Shanghai branch has achieved significant success in slowing desertification with its Million Tree Project.

Founded by renowned primatologist and anthropologist Jane Goodall, Roots & Shoots is an influential international non-governmental organization aiming to inspire people of all ages, especially youths, to take part in making the world a better place.

The Roots & Shoots branches around the world maintain only loose connections with each other so that each individual branch can carry out unique projects tailored to its regional needs. One of the main missions of R&S Shanghai is to have a positive impact on China’s natural environment.

Desertification in China poses a great challenge to environmental protection as well as the development of those desertified regions. In recent decades, growing deserts have devoured 3,600 square kilometers of grassland each year and forced nearly 200,000 residents from the desertified areas to relocate.

To fight the consequences of desertification, including powerful sandstorms, the loss of arable land and people being driven out of their hometowns, R&S Shanghai initiated its Million Tree Project in 2007. It is also the inaugural project of the organization.

Led by Tori Zwisler, Chairman of R&S Shanghai, and Executive Director Zhong Zhenxi, the Million Tree Project aims to reduce the combined effects of land exploitation and climate change, which eventually leads to desertification, by planting one million trees in Inner Mongolia.

The project began its work in Tongliao Municipality, Inner Mongolia. By cooperating with local and foreign forestry and agricultural experts and mobilizing tens of thousands of volunteers across the globe, the Million Tree Project achieved its first million tree milestone in 2012 and passed the second million mark in 2016.

In consideration of local soil and climate conditions in order to achieve long-term reforestation success, local and Oregon State University forestry experts have carefully chosen specific species to plant in the area.

The majority of the trees planted are hybrid poplars, chosen specifically because it needs little water. In 2009 and 2011, yellowhorn and Scots pine trees were added to the planting list and proved to be beneficial to the region not only ecologically but also economically.

Working with the Baijitan tree farm, the experts have developed an integrative sand control method by planting a combination of different shrubs along with an expansive straw grid. While the straw grid can increase the roughness of the terrain as well as reduce water evaporation, which can give the shrubs better soil conditions to grow in, the matured shrubs can benefit soil development and the restoration of vegetation diversity.

Apart from the standard procedures of planting trees like many previous forestation projects, the Million Tree Project worked closely with local farmers and tree planters on post-planting maintenance. Licensed farmers can harvest trees but are required to replant new trees on the same spot, making the planted forest a sustainable environment.

More than 50 companies have purchased forests in increments of 2000 trees, and more than 20,000 volunteers have helped plant two million trees between 2007 and 2016. Additional tree planting projects have been started in Ningxia Province, adding more land to the reforestation project portfolio.

The Million Tree Project is a great example of a small environmental NGO having a huge impact on the natural world as well as a successful collaboration between the experts and volunteers. It demonstrates that everybody has the ability to change the world. The project, with the collective efforts of people coming from every corner of the world, will generate greater momentum to eventually eliminate desertification in China.