Tag Archive for: Depletion of Resources 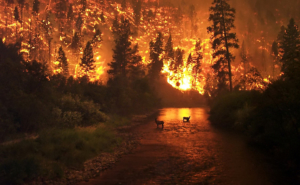 The effects of wildfires are destructive, deadly and devastating. Additionally, they are becoming increasingly frequent. From the west coast of the United States to Australia and Russia, wildfires are spreading like never before, wreaking havoc and adding unparalleled burden to the countries’ poor.

The Effects of Wildfires

Wildfires burden society by depleting resources, burdening the economies and impacting citizens’ health. Wildfires force the evacuation of people and often destroy homes and valuables. The University of Oregon Scholars Bank states that a person needs an income of twice the poverty line to be fully capable of protecting oneself, family and assets from fires. Thus, these fires have a disproportionate effect on the poor.

Wildfires Cause Depletion of Resources

One way in which wildfires are destructive is the depletion of resources. The burning of forests destroys properties, trees, vegetation and wildlife. Wildfires often strip families of everything they own in a matter of minutes.

In addition, these fires deplete not only air quality but water quality as well. As wildfires burn, they contaminate the water in streams, lakes and reservoirs which limits access to clean water. Thus, the affected area’s drinking water and food supply are not usable. Limited food and water supplies make it harder for the poor to live.

Wildfires Cause a Decrease in Economic Stability

Wildfires take a large toll on an affected areas’ economic security by causing economies to close. As a result of closing the economy, tourism decreases. The effects of wildfires make areas untravellable as they pose a massive threat to people and destroy forests and hiking trails that often draw tourists. In addition, the economy slowed due to the destruction of resources.

This lack of tourism and loss of resources cause loss of income in affected economies. So, as income from tourism decreases, the number of available low-paying service industry jobs decreases as well. This causes those already living on or below the poverty line to face greater financial hardships as hours and jobs are limited. Furthermore, as fires destroy forests and trees, jobs in the logging or wood chipping industries run scarce.

Wildfires Cause Strain on Human Health

Furthermore, wildfires pose a great threat to human health as their smoke depletes air quality. This can result in reduced lung function, bronchitis, heart failure and asthma among other things. The effects of wildfires on mental and physical health are long-lasting. These effects on health disproportionately affect the poor as they often have limited access to affordable healthcare.

The Increase in Wildfires Worldwide

Wildfires know no bounds and have begun to spread with increased frequency to places that have little to no previous experience with them. Siberia, a tundra that has had limited prior experience with fires, is now struggling to put out a fire that has burned upwards of 6.5 million acres.

Similarly, in 2020, Australia suffered devastating wildfires that burned 44.5 million acres and killed upwards of 30 people. It killed large amounts of wildlife and devastated their environment. Likewise, Australians are feeling the effects of wildfires in Australia today. The Australian government did little to curtail the devastation of wildfires which led to countless protests by citizens.

The devastating effects of wildfires worldwide are far from gone. However, through the increase in aid and wildfire-related programs, the goal to limit drastic spreads and devastation is possible.

The United States developed many fire-related programs that created job opportunities focused on research, fighting and prevention methods and landscape rehabilitation. These programs aim to limit the level of devastation associated with wildfires. Additionally, the USAID also provided humanitarian support to Australia throughout its 2020 wildfires.

With increased research and fire-related programs in addition to global support during times of active burns, the devastating impacts of wildfires can reduce. Thus, they will lower the impacts on communities and preventing an increased burden on the poor.