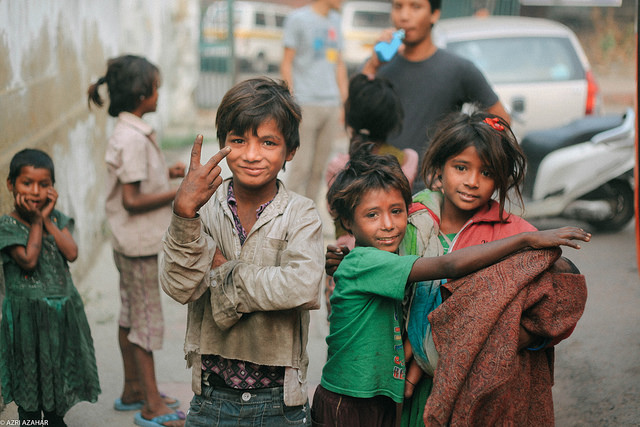 As the population in India continues to increase steadily, so does the number of people living in slums. The country’s 2011 census revealed that the slum population currently stands at 65 million people, up from 52 million in 2001. 2,613 of India’s 4,041 towns are classified as slums. In the territory of Delhi, where capital city New Delhi is located, 1.8 million of the 22 million residents live in 22 slums.

The India census defines the term “slum” as an area resided in yet unsuited for human habitation. These places are deemed unfit if they are a hazard to human health and safety due to lack of space, ventilation, cleanliness and other factors. These areas also lack hygienic drinking water facilities, functional bathroom areas and plumbing.

The Delhi slum population lives day-to-day without the basic amenities of electricity, plumbing and gas. Most of the residents are unemployed or daily wage workers, making less than the equivalent of one U.S. dollar a day.

With the drastic population increase of the slums, the few resources these areas have are becoming even more depleted and run down.

However, not all of the census’ findings are negative. During the 10-year period under review, the Indian slum population grew at a rate slower than the general urban population. The average household size in slums is no larger than the average household size of urban areas. Slum literacy rate rose from 72.2 percent in 2001 to 77.7 percent in 2011. This is still below the overall Indian literacy rate of 84.1 percent.

WaterAid India is an organization that works to help some of the main issues the growing Delhi slum population is facing: lack of water, sanitation and hygiene, abbreviated as WASH. WaterAid aims to increase Delhi’s access to WASH through deliveries, supporting communities to manage and monitor their own services and advocating for improved WASH conditions from the government.

Asha is another organization seeking to aid Delhi’s slum residents. Asha provides many services for slum dwellers such as access to healthcare, financial services and education. They seek to meet basic environmental and healthcare needs of the population and empower and educate slum dwellers to change their own futures. These are just two of the many organizations seeking to improve the lives of the growing Delhi slum population.