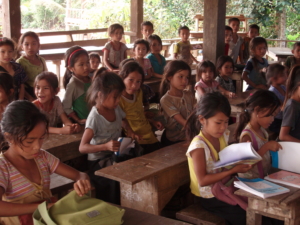 As a developing country in Southeast Asia ruled by a communist government, Laos has a very limited education system. The country is populated by several ethnic groups but only the Lao Loum, or “lowland Lao,” have a tradition of formal education and written script.

Buddhist temple schools called wat schools were the main source of education until the mid-twentieth century and the subjects covered were rudimentary. Buddhist monks would teach their pupils basic arithmetic and reading skills as well as social and religious subjects. At the time, only ordained boys and men had access to further education.

The French had an influence on Laotian education during the colonial period but, unfortunately, the secular system it established had little relevance to the vast majority of rural citizens. Most students never exceeded secondary school studies, and the few that did had to travel to larger cities in Vietnam. The elite minority who reached university-level studies usually traveled all the way to France to continue their education.

Recently, the Lao People’s Democratic Republic, or LPDR, has shifted its focus toward constructing an education system that will encourage broad ideological thinking and mobilize potential. With goals to build a well-rounded development in areas such as economy, technology and culture, the LPDR sees education as a way forward for the nation. It wants to strengthen the national education system by improving its overall quality, increasing relevance and ensuring equitable access.

These goals are specifically listed in Article 19 of Lao’s Constitution that states that “educational, cultural, and scientific activities are the means to raise the level of knowledge, patriotism, love of the people’s democracy, the spirit of solidarity between ethnic groups, and the spirit of independence.” In Article 22, the Constitution asserts that “the State and society shall endeavor to improve the quality of national education system, to create opportunities and favorable conditions for all the people to receive an education, particularly the inhabitants of remote and isolated areas, ethnic minorities, women, children, and disadvantaged persons.”

The Decree on Compulsory Primary Education of 1996 was a milestone in these endeavors by making primary education free and compulsory for all children whether by public or private institutions. All schools were mandated to comply with a national curriculum, thus standardizing minimum requirements of education for all schools.

The national program currently consists of primary schools where students learn for five years and can then move on to two periods of secondary education—four years in lower secondary and three years in upper secondary. Although girls are allowed to attend primary and secondary schools, they are still underrepresented along with cultural and language minorities. This is reflected in Lao’s literacy rates, where 86 percent of females between the age of 15 and 24 were surveyed to be literate in 2011, whereas 92 percent of males of the same age group were confirmed to be literate.

The Education Law enacted in 2000 and amended in 2007 reasserts the claim made in the Laos Constitution that “all Lao citizens have the right to education without discrimination” and establishes that the government has a duty to expand education for “the development of Lao citizens’ necessary knowledge and capacity for their occupation or further study.”

Although education in Laos is still not up to speed with that of developed nations, it is clear that the LPDR government has prioritized education improvement as a means of both modernizing the state and safeguarding the future of its people. It understands that education is an important means of national development and has strongly invested its interests in expanding education to reach that end.