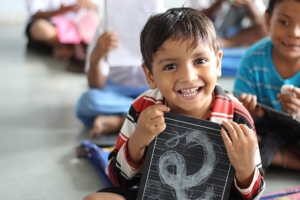 Child mortality rate, according to Our World in Data, is defined as the probability that the newborn baby will die before reaching the age of five. It is calculated as the percentage of babies that do die before this age, per 1,000 births. Similarly, the infant mortality rate is the number of children deaths occured before the child reaches his or her first birthday, per 1,000 births. Over the course of world modernization, the child mortality rate has declined greatly, in some areas more than others.

In 1990, one in 11 children died before their fifth birthday worldwide, whereas in 2017 that number has more than halved and only one in 26 children died before the age of five. This positive trend can be attributed to improvements in the health field, education and technology, as well as many other factors. The drop in child mortality rate is not exclusive to developed countries, because the developing country of India has also seen tremendous declines in mortality rate over the past several decades.

In India in the 1960s, anywhere between 20 percent and 25 percent of children died before their fifth birthday. This trend continued through the end of the 20th century and at the beginning of the 21st. As of 2015, only 4.8 percent of children are projected to die before they turn the age five. Despite the declining child mortality in India, the country still contributes significantly to the world’s children mortality rate, as it still has negative statistics of 42 deaths per 1,000 live births. The main causes of death for children under the age of five are highly preventable, given the right tools. The most prevalent cause is pneumonia, followed by newborn infections, birth complications and malaria. If more women in India were receiving effective prenatal health care, the numbers would likely drop even more.

The Decline of Child Mortality in India

The declining child mortality in India can be attributed to a number of factors. India saw a great increase in the funding of health care initiatives in the first two decades of the 21st century. The percent of GDP used towards public health was 1 percent in 2004 and jumped to 1.4 percent in 2014, which is a 40 percent boost over the decade. With increased funding towards health care, the country is able to set up set up health infrastructures in areas that did not have any and train community health workers. These trained health workers could serve as the frontline in the mission to improve health in India, and women and newborns would benefit greatly from the extra care.

The elimination of communicable diseases such as polio and tetanus also play a huge role in the declining child mortality in India. There are also plans being put in place for the elimination of more diseases such as malaria and tuberculosis in years to come. While the public health system is not yet in a place to focus on curing diseases, they are aiming for much funding at prevention.

While the declining child mortality in India has been a success for the country thus far, there is, of course, still a long way to go. One of the main areas that could be significantly improved is the time and health care to the women before the child is even born as not enough pregnant women are engaging in prenatal checkups, and many don’t have traditional deliveries in medical institutions. If both these practices were increased, child mortality would drop even more and children would have a better chance at living a healthy life from the beginning. Additionally, the continued improvement of water sanitation and hygiene would improve the lives of all people in India, and certainly contribute to healthier children.

Although the child mortality rate continues to drop in India year after year, the country still needs to understand that this battle is not won. While all citizens must participate in order for the country to continue the positive trend, the government must focus on improving the health care system and devote the attention to the mothers and young children.