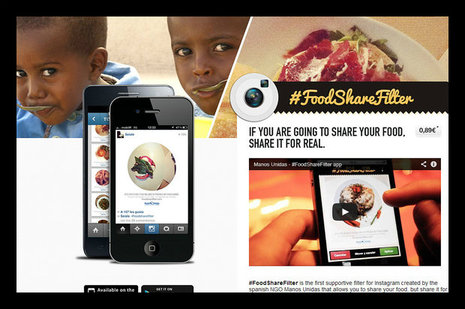 One of the most common types of pictures posted on Instagram is food.  We love to share what we cook, what we eat, and what we enjoy. One charity has decided to capitalize on the idea of sharing pictures of your food.  Food Share Filter, a new app, is the first supportive Instagram filter. The idea is to use Instagram to fight world hunger. The app was created by DDB Spain and all money raised goes to support a Salvadoran charity called Manos Unidas.

Manos Unidas is a non-profit organization working with the Association of the Catholic Church in Spain. The charity works to promote development in the third world. They focus on working to eradicate the structural causes of hunger, disease, and underdevelopment such as injustice, prejudice, and inequality.  Geographically, Manos Unidas works in Africa, Asia, American, and Oceania to assist in development causes there.

The filter can be downloaded from the Apple Store or Google Play store. Once downloaded, anytime a user post a picture of food, they can add the filter #FoodShareFilter.  This immediately adds the message, “This picture helps millions of people not to suffer hunger.”  It is an easy way to raise awareness in posting photos that would normally be posted.

The #FoodShareFilter is available in both English and Spanish and costs$0.99 in the Apple Store and $1.16 in Google Play.  The app was launched late last week and all proceeds from the purchase of the app go directly to the charity.  Check it out and download the app to start raising awareness on world hunger!