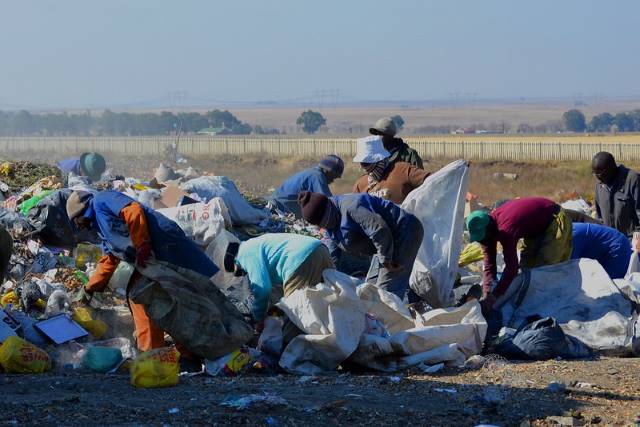 Gjenge Makers is a Nairobi-based startup company that offers a sustainable, practical and affordable solution to combat poverty in Kenya. The company sells affordable alternative building materials. Its products, which include an assortment of bricks with different functionalities and styles, are forged from recycled plastic and sand. These plastic bricks can help reduce poverty and plastic waste in Africa.

The Plastics Waste Crisis in Kenya

Garbage is quickly accumulating all around the globe and Africa is bearing the brunt of rising waste levels. Governments in resource-rich regions typically have the capacity to pare the trash down into a flaky substance, slashing the amount of physical space it occupies. This process is time-consuming and expensive. However, several countries such as Kenya instead address the issue by implementing a series of plastic bans.

Plastic ban policies typically have socioeconomic and environmental consequences. Throughout the state are large piles of waste that have built up as a result of excessive plastic use, such as the infamous Dandora dump in Nairobi. “Plastic traders” scour these junkyards for limited resources like bottles and certain compounds that can be exchanged for money. Many at the lower end of the disparity are also disproportionately affected by policing under these laws as plastic bag distribution, manufacturing and usage are subject to a fine and/or prison sentence. Additionally, some businesses will generally relocate to other states to avoid such strict laws, damaging economic interests and employment numbers.

Kenya had been taking a slow-moving approach in curtailing the plastics crisis when Gjenge Makers founder, Nzambi Matee, decided to take matters into her own hands. The entrepreneur experimented with mixing recyclables with sand in her mother’s backyard and eventually composed a formula to build a brick five to seven times stronger than concrete. Her products are now a core economic ingredient toward upturning poverty and improving infrastructure at the community level.

The Housing Crisis in Kenya

Kenya is currently undergoing a severe housing deficit, with homelessness numbers rapidly escalating under the pandemic. The estimated housing deficit stood at two million in 2012 but factors such as limited resources are further distending the issue. With limited support and a lack of housing, many families are struggling to survive.

Gjenge Makers address both the plastic waste and housing crisis through its plastic brick solution. In accordance with its “Build Alternatively, Build Affordably” model, it seeks to contribute a key product that could empower individual communities by giving them the resource needed to rise out of poverty. Matee has declared eradicating poverty a personal goal of hers and her new innovation can help build more shelters to combat the housing crisis. The company also seeks to make its products accessible to essential learning institutions such as schools.

Gjenge Makers currently receives plastic through a multipronged approach. It collects from factories and recyclers seeking to discard their trash, whether at a price or for free. It also uses a mobile application that incentivizes rewards and allows homeowners to notify Gjenge Makers when they have available plastic. The formula to build the bricks requires a particular type of plastic compound, often labeled on the products themselves.

Gjenge Makers is a champion of eco-friendly, economic empowerment in a crisis that is widespread throughout the continent of Africa. Though the startup is currently based in Nairobi, it seeks to eventually expand and support other African states as well. So far, Gjenge Makers recycled 20 tons of plastic and created a total of 112 jobs.