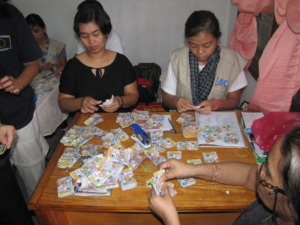 The fallout from a new cryptocurrency game in the Philippines, Axie Infinity, has prompted involved parties to question the nature of the role that cryptocurrency plays in the economy of developing countries. The game’s adverse effects halted players’ hopes of financial gain, which cost many, including those on low incomes, their savings. Axie Infinity originally saw Filipinos earning sums as large as $487 in just over two weeks, and thousands of people entered the crypto game, as it soared in popularity. However, the game’s economy crashed, leaving many of its players in debt and a poor reputation for cryptocurrency in the Philippines.

The Appeal of the Game

The Philippine Statistics Authority saw an increase in the percentage of the population living in poverty, from 21.1% in 2018 to 23.7% in 2021. One can attribute this increase in poverty to the COVID-19 pandemic, which negatively impacted many people’s work and income stability. Many Axie Infinity players had an attraction to the play-to-earn element of the game so that they could improve their incomes. The game involved buying monsters (Axies,) that are NFTs (non-fungible tokens.) Players could trade or breed these and also obtain an exchangeable currency called SLP (smooth love potion).

How the Game Collapsed

The low income of many players (minimum wage in the Philippines currently being around 570 PHP/$10.3 USD) meant that as SLP began to increase in price, it became more difficult to afford the starter monsters and therefore, Axie Infinity became less financially accessible. This led to an employment scheme where “managers” from high-income countries, such as Australia, would buy monsters, and those who could not afford to would take the position of “scholars,” leveling the monsters up, while the managers raked in the profit. As the game’s popularity increased, the value of the currency dropped, and a bad situation turned into a catastrophe for cryptocurrency in the Philippines, with a hack costing the network and its players $600 million. Despite the players getting their stolen money back, the game lost its credibility as a multi-faceted lack of security emerged, and many players were worse off than where they started.

Upon seeing the damage that the Axie Infinity crash caused, it is easy to doubt the benefits of cryptocurrency, specifically to those living in poverty. Despite the magnitude of the fallout, cryptocurrency still plays a crucial role in the socio-economic system of the Philippines. At least 70% of people in the Philippines do not have a bank account, and sources show that cryptocurrency and distributed ledger technology (blockchains) are helping to decrease this percentage. Having access to banking is a vital tool for bringing people out of poverty, enabling them to have more financial stability and security in receiving pay, paying bills and opening doors for aspiring entrepreneurs. More than half of Filipinos would consider investing in cryptocurrency, and the trust issues caused by Axie Infinity may be somewhat repairable by building knowledge.

In order to tackle financial exclusion, and therefore poverty, using cryptocurrency must become the accessible tool it has the potential to be. This is only enabled by further research to ensure regulation will not lead to a market collapse, and for users to be educated and informed. Despite players having some trust issues with the prospect of regulation, many believe that regulating could make the market bring possibilities for rapid economic development. Working on these trust issues by studying and teaching cryptocurrency in the Philippines would mean that people could reap the benefits with minimal risk.