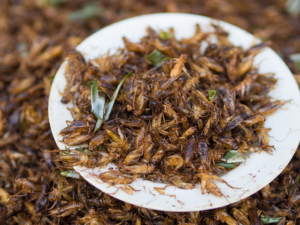 Vendors in bustling Cambodian markets often advertise their wares including dragonfruit, vegetables, freshwater fish and crickets. Since the 1970s, crickets have evolved from being a nutritious but cheap “hunger food” to a Cambodian diet staple. Cambodia traditionally suffers from high levels of malnutrition, with almost 80% of children lacking sufficient nutrients. However, as a result of cricket farming, crickets offer a surprising remedy containing protein, amino acids and micronutrients in each crunchy bite.

The Steps to Farming Crickets

Cricket farms consist of large concrete block pens. They contain large populations of crickets and even produce about 25 to 30 kilograms of insects per cell. Depending on farm size, there can be as many as 100 block pens on one farm. Pens are usually covered with mosquito netting to contain and protect the insect livestock. Inside the cells is the cricket’s bedding of layered rice husks or egg cartons.

The most expensive cost of cricket farming is feed. Crickets require high protein animal feed, commonly chicken feed. However, before harvesting the crickets, their diet changes from feed to fruits and vegetables. This is a less expensive feeding option and also improves the taste of the insects.

The breeding process within the pens is also relatively simple. As soon as the male crickets can stridulate, or make the characteristic chirp associated with the insect, they can breed. Cricket farmers then place bowls of sandy mixtures in the pen where females lay their eggs. Farmers patiently wait for one to two weeks to give females adequate time to lay their eggs before removing the bowls and transferring them to a new pen. They wait for the crickets to hatch and mature, which takes about 45 days, before starting the process over again. Cricket farming is a simple process with low overhead costs. Farmers can begin production with limited resources and grow from their profits.

Giving struggling farmers the tools and knowledge to farm crickets provides two crucial elements to the end of their poverty. These elements are sustainable food and sustainable income. The farmers can feed their families with their livestock and then sell the remaining product for profit. Furthermore, ACK recognizes the environmental benefits of cricket farming. It requires fewer resources, takes up less space, and emits fewer greenhouse gases than other protein production like poultry.

To make fried crickets, one needs a tablespoon of salt, two tablespoons of sugar and some umami followed by a dash of water. Then, add flour and mix to create a frying batter. Dip the crickets in the batter then throw them in the frying pan to sizzle. The resulting cricket retains its crunchy shell with a smooth texture on the inside. Fried crickets line the streets of Cambodian markets and offer the perfect protein to any dish. The food provides more than just taste. It is stuffed with nutrients to improve the health of Cambodia’s malnourished population and provides employment and income to impoverished farmers. The six-legged creatures are becoming the new face of poverty reduction in the nation.