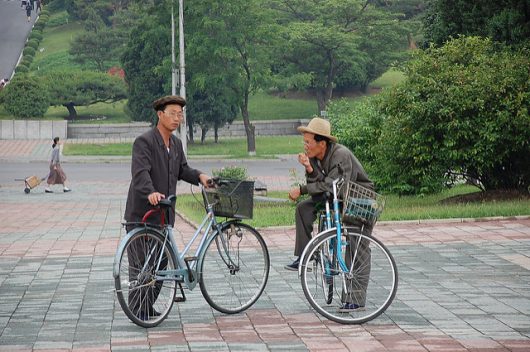 After a recent series of verbal threats and missile tests from Supreme Leader Kim Jong-un, President Donald Trump put North Korea back on the U.S. list of state sponsors of terrorism, a designation it shares with only three other countries.

Normally, it is in the U.S.’s interest to see credit access increase responsibly around the world because more credit access generally means more investment, growth and opportunities for trade. However, when it comes to countries from the state-sponsored terrorism list, increased growth can give a boost to dangerous regimes—and their (nuclear) weapons programs.

That system is the legacy of a communist system, set up in the 1950s, that provided financial security for North Koreans. But, a major famine in the 1990s led to an economic collapse that crippled that system—and the North Korean government has done little to change it since.

As The Wall Street Journal notes, a semi-market economy emerged in the wake of that economic collapse that helps provide a living for up to three-fourths of the nation and is largely supported by unauthorized private commerce.

As a result, an unregulated system of lending and currency exchange has risen, making it possible to get loans and financing. North Korean defectors have described a system in which private savings are being channeled into lending to make a profit.

Scams were common at first, due to the lack of legal infrastructure and investment guarantees, but over time, it seems that trust and credit have grown. Lenders are investing in everything from crop seeds and fertilizer to merchants who import foreign goods, like smartphones.

Reuters reports that, in theory, plenty of investment opportunities exist in North Korea along China’s border. Most of these are related to tourism or manufacturing and had funding from China and other international investors.

However, U.N. sanctions against North Korea have led the Chinese government to ban new or expanded Chinese investment in North Korea and transactions with North Korean banks.

Ultimately, the growth of North Korean credit access and investment depends on the Kim administration dramatically altering course. It would need to show a willingness to cooperate internationally and develop a legitimate market-based economy. Neither seems likely to happen anytime soon.

Learn about poverty in North Korea