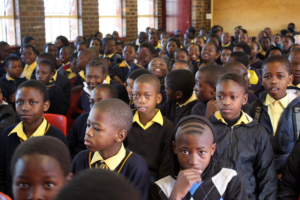 In schools worldwide, mathematics is a leading subject that is necessary for people to progress and complete their education. Although educational systems differ across countries, many still see math as one of the most crucial skills for developing critical thinking building blocks that drive logic and decision-making. While mathematics is held to a high standard in countries within Africa, education in South Africa lags behind its counterparts in terms of performance on international standardized assessments. With a lack of trained math teachers in schools, large class sizes and “deficient and outdated infrastructure, instrumentation and teaching materials,” many students are unable to reach their full potential. As countries seek different methods like technology to better educational outcomes, one specific school in Cape Town has adopted a unique approach: Hip-Hop. Hip-hop helps improve education in South Africa by recognizing the various methodologies of learning.

Kurt Minnaar, a former dancer and current eighth-grade teacher, decided to test a creative approach when he saw his students struggling to grasp concepts in school. Minnaar recognizes that while the current system of education in South Africa may have worked for the older generation, it is failing today’s kids. As a student who once struggled with math himself,  Minnaar believes in recognizing four different types of learning methodologies in education. Acknowledging these different learning styles, Minnaar uses music and dance in the classroom to engage students in their learning and improve math outcomes. With the rise of social media, especially music-focused platforms such as TikTok, engaging students with the activities that appeal to them can help improve their math outcomes.

The Rise of Social Media

Social media is growing in South Africa, with the rate of social media use increasing 19% since 2019. Of the current South African population, roughly 40% are active users on Facebook, Instagram and Twitter. Young people aged 18-24 account for 40.4% of these users.

Confirming the rise in social media use, a survey of 200 South African university students shows that 88% of students identified as users of social media. This illustrates the large role and the growing influence of social media on the lives of the current generation of students. Although some see the increase in the use of social media as unhealthy, young educators like Minnaar see it as an opportunity to use the current culture and trends to make learning enjoyable for all.

Since Minnaar began teaching, he has created several rap beats that stimulate the minds of his students while increasing their ability to retain information. Some of his pieces include “Cre-eight,” “Trick-onometry” and “Van Guard,” all of which address multiplication tables through catchy hip-hop beats. To ensure that students are gaining the most out of his classes, Minnaar has students rap the songs to the beat of the music he plays off his laptop and encourages students to dance during class. He sees creative activities like singing and dancing as essential to helping students enter a headspace conducive to learning. Thus far, Minnaar has only created content for multiplication tables. However, the results have been so positive that he is currently working on new material and lesson plans to address different areas of education in South Africa.

While Minnaar enjoys creatively interacting with his students, he also recognizes the importance of scholastic performance and his role as an educator to ensure students’ progress. Thus far, he has seen success in helping his students in their academic achievements. He also recognizes, however, that some students respond best to traditional methods. Minnaar’s only hope is that people remain open-minded to the many approaches to education in South Africa. After all, the approaches of some of the greatest individuals of all time were once met with skepticism. Thus, perhaps mathematics and hip-hop are not the most unusual pair after all.