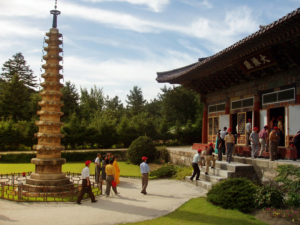 On May 12, 2022, the president of North Korea, Kim Jong-Un, made a public appearance. For the first time, he was wearing a mask. The world took even greater surprise when he declared that North Korea was under its first lockdown. This calls into question: what is COVID-19’s impact on North Korea?

Isolated From the Rest of the Globe

Prior to this announcement, North Korean officials claimed that not a single case of Coronavirus had entered their country. The nation, isolated from the rest of the globe, has previously endured life-threatening conditions. Recently, after a severe flood, North Korea has faced its most intense food shortage in the past decade. What’s more, its already limited healthcare system has deteriorated and left millions of people without adequate care.

Many question the accuracy of disease data. As a closed-off country, journalists find it very difficult to paint the full picture of North Korea. For instance, researchers were unaware of the 1990s North Korean famine until its aftermath, when survivors told their famine stories.

Professor Park Won-gon, from the Department of North Korean Studies at Ewha Woman University predicted that North Korea could “institute draconian measures to those of its biggest ally, China,” according to VOA News. This meant strict lockdowns confining people to their homes, workplaces and dorms. Unlike China, though, North Korea doesn’t have the basic food supplies that China has to enforce such extreme restrictions. Consequently, thousands of people in North Korea are starving to death under this new lockdown protocol. Citizens could not access new harvests or markets which further strangled the economy.

The lockdown also stymied other solutions proposed by organizations. Particularly, the lack of mobility severed communication with international agencies. COVID-19’s impact on North Korea has, thus, proved massive. Medical resources and help have been inaccessible due to such stringent lockdowns.

Without vaccines, North Korea has resorted to herbal solutions. KCNA recently reported that “Thousands of tonnes of salt were urgently transported to Pyongyang city.” North Korea will use salt to produce an antiseptic remedy — in place of vaccines. Shanghai also transported millions of traditional medicines like herbal remedies and flu capsules to address COVID-19 in North Korea.

Unfortunately, these have no scientific grounding. Citizens have been drinking teas, salt water and even taking antibiotics. However, due to mass famines, many North Koreans have weak immune systems.

It’s unclear if this has worked. The treatments are approved by the DPRK, which develops methods for “scientifically controlling the spread of the…virus.”

Before these herbal treatments, North Korea reached around 400,000 cases daily. Recently, it reported “about 17,000 to 30,000 new fever cases.” Many experts believe North Korea is manipulating health data to shield itself against geopolitical consequences. Yet if it isn’t manipulating data, these herbal remedies may help mitigate COVID-19’s impact on North Korea.

So far, North Korea has rejected most international help. Aid agencies have opened their doors to provide the nation with the necessary medical resources. Kim Jong-Un twice denied vaccines from Covax, according to The Washington Post. South Korea and the U.S., too, have asserted that they are open to providing aid. Nonetheless, North Korean elites continue to prioritize geopolitical leverage over the health of their constituents. It remains unclear whether North Korea will accept aid and scientifically proven disease resources from other countries.

North Korea’s sudden outbreak demonstrates that the COVID-19 pandemic is not nearing an end. While the U.S. and other major nations are equipped with a “vaccine arsenal,” other countries are not as fortunate.

As of May 18, 2022, one report found that fewer than 13% of people in low-income countries are vaccinated. With such low rates, COVID-19’s impact on North Korea and developing countries is disproportionately larger than developed nations.

These concerns are urgent. Officials in Geneva told reporters that “uncontrolled transmission of the virus” in developing countries could give rise to new COVID-19 variants, The New York Times reports. North Korea, for example, could be a new variant’s breeding base.

Although North Korea hasn’t accepted aid from many countries, it seems to be getting health resources from China as of May 30, 2022. However, if the outbreak becomes too severe, North Korea will always have the open arms of the U.S. and U.N. to provide assistance.