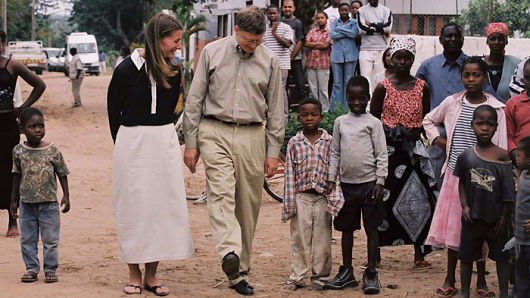 Corporations have a variety of ways to contribute to poverty relief. Methods include matching employee donations, promoting employee volunteerism, providing donations in kind and simply providing grants to or partnering with charitable organizations. Some even partner with governmental institutions such as the United States Agency for International Development in hybrid public/private aid ventures.

Corporations disperse funds to a plethora of good causes, but some have a particular focus on poverty reduction, development and public health initiatives internationally. Among the most generous corporations that support poverty-reduction programs are Chevron, Johnson and Johnson, Microsoft, JP Morgan Chase and General Electric.

In 2013, Chevron donated $274.3 million, or 0.6% of its pretax profits to charitable organizations. The company has an employee donation matching program that covers up to $10,000 per year and $3,000 for retirees. Being a highly globalized corporation, Chevron sponsors a variety of international development programs, such as the Niger Delta Partnership Initiative Foundation, which provides livelihood training to residents of the Niger Delta. Last year, Chevron pledged an additional $40 million to the program.

Johnson and Johnson donated $966.3 million in 2012 in cash and goods, a full 7% of its profits that year. Johnson and Johnson has a particularly robust corporate philanthropy program, doubling employee donations to eligible nonprofits. They also have a particular focus on global health issues. For example, the company partnered with the United Nations, the World Bank and the World Health Organization to support the U.N.’s Health Four+ Initiative, providing health care and obstetric training to populations in low-resource settings in Tanzania and Ethiopia.

While Microsoft’s philanthropic activities are often associated with the co-founder Bill Gates’ Foundation, the company itself has a very generous donor program that provided $948.6 million worth of in-kind donations and $112.2 million in cash donations in 2014. Microsoft’s corporate philanthropy does not have a particular focus on poverty reduction, however, they provide technology and software to about 86,000 nonprofit organizations globally.

JP Morgan Chase donates to several different kinds of philanthropic causes, contributing $210.9 million in 2013. On top of their donations, the company also provides capital for impact investment funds, supporting a wide variety of international economic development ventures. The company partnered with the Bill and Melinda Gates Foundation to create one such project, the Global Health Investment Fund, which invests in the development of medical technologies that target diseases such as malaria and tuberculosis, which disproportionately affect the developing world. Another fund that JP Morgan Chase supports is the African Agricultural Capital Fund, which invests in agribusiness in East Africa, targeting small holder farms and rural economies.

General Electric is particularly committed to corporate philanthropy, having been the first company to introduce an employee donation matching program, which now supports up to a generous $50,000 per year. In 2013, the $154.8 million that GE donated went to initiatives such as its Developing Health Globally Program, which sponsors medical training and technological assistance in Rwanda, Ghana, Uganda, Myanmar and Indonesia.

Most large corporations have fairly long-standing traditions of giving back to their communities and supporting international development through corporate philanthropy programs. Corporations typically donate anywhere from 1% to 5% of their annual profits to such programs, sometimes even partnering with government agencies such as the United Stated Agency for International Development. However, it is worth noting that state solutions to poverty reduction continue to have the greatest funding potential. For example, Official Development Assistance in the United States alone amounted to about $30 billion in 2013, or 0.18% of the budget, many billions of dollars more than the top 10 corporate donors combined that year. While corporate donations are essential to the fight against poverty, official state aid could, if properly harnessed, represent the greatest solution to poverty worldwide. The data comes from an annual study, published by the Giving USA Foundation and the Indiana University Lilly Family School of Philanthropy. The study used U.S. tax data from the Internal Revenue Service, government economic indicators, and other research. “In 2012, Americans were feeing better – but not great,” said Gregg Carlson, chair of the Giving USA Foundation. In general, donations follow the rise and fall of the economy, and, he said, even though the increase was relatively small, it showed that the “healing continues, with the progress being good.”

Although individual giving constitutes approximately three-quarters of all giving, it is thought that it is still suffering because of widespread unemployment, underemployment, and worries about the economy. However, the upward trend is a positive sign that charitable giving will continue to rise. “One thing we’re happy with is that it’s the third straight year we’ve had an increase,” said Keith Curtis, a fundraising consultant who is vice chairman of Giving USA. Should donations continue to increase at similar rates, it will take an estimated six years to return to the 2007 pre-recession levels.