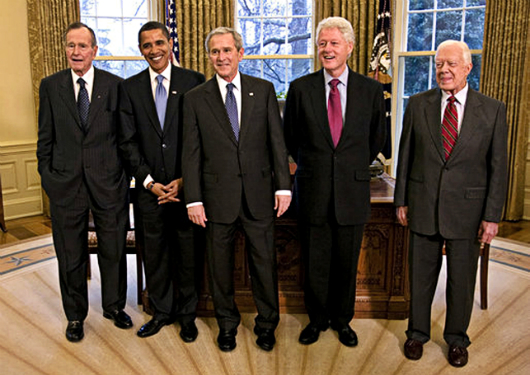 Although President Obama has only 20 months left of his presidency, he can still do a lot of good once outside the Oval Office. Here are four ways former presidents made a difference for the world’s poor:

George Bush: The former Republican president is well known for his AIDs relief work in Africa. While in office, President Bush signed the President’s Emergency Plan for AIDS Relief. The program significantly increased access to antiretroviral drugs on the African continent, saving millions of lives. That effort set the stage for his post-presidential humanitarian work with First Lady Laura Bush through the George W. Bush Institute. Located at the Bush Center in Dallas, the organization promotes global health and human rights through a variety of programs. Through the Pink Ribbon Red Ribbon initiative, for instance, the president and first lady are working to reduce deaths associated with cervical and breast cancer in the developing world.

Bill Clinton: Following his presidency, Mr. Clinton sought to address humanitarian issues worldwide. The Bill, Hillary and Chelsea Clinton Foundation has quickly become a cornerstone in the fight for improved global health, economic development, gender equality and environmental protection. Founded in 2001, the Foundation includes a wide range of humanitarian endeavors. The Clinton Health Access Initiative, for example, works to improve healthcare infrastructure, while the Clinton Development Initiative stimulates economic growth by increasing access to financial services for entrepreneurs in the developing world. The Foundation also has a strong track record in promoting the well being of women and girls across the globe.

George H. W. Bush: At 90-years-old, George Bush Sr. is the oldest president on this list, besting fellow nonagenarian Jimmy Carter by a few months. The elder Bush shows no signs of slowing down though; he’s gone skydiving on his 80th, 85th and 90th birthdays, and leads an active life. The president has been just as active in promoting public service through his Points of Light organization, which encourages volunteerism worldwide. The network boasts 250,000 service projects every year across 30 countries. That adds up to 30 million hours of volunteer service each year.

Jimmy Carter: President Carter has had many roles in his life: peanut farmer, Governor of Georgia, President of the United States—but he has perhaps found his great success as an international humanitarian. He is one of four presidents to receive a Nobel Peace Prize, but the only one to do so after leaving office. Most of his efforts have involved The Carter Center, which was founded in 1982 and takes “Waging Peace, Eradicating Disease, Building Hope” as its motto. The Center has targeted a wide range of diseases, including guinea worm, river blindness, trachoma and lymphatic filariasis. Thanks to the president’s efforts, the prevalence of guinea worm disease has been reduced by 99.99 percent since 1986.