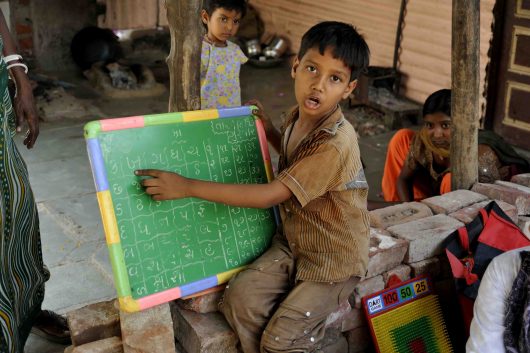 The Stanford Center on Poverty and Inequality (CPI), a nonpartisan research center, is monitoring trends in poverty and inequality, developing policy and explaining the root causes of poverty. This education begins in the classroom and finishes in the field, such as rural villages in Africa. The Center supports research students and established scholars in the field. All research is published in CPI’s magazine Pathways, which will likely become the new fact-based journal on poverty, inequality, income, discrimination and more.

Since CPI’s beginning in 2006, the Center has received support from the US Department of Health and Human Services, Stanford University, Office of the Assistant Secretary for Planning and Evaluation, Pew Charitable Trusts and others. This type of intellectual approach and curiosity might be the next step needed for a meaningful change in poverty reduction.

Ending Poverty with Technology is just one of many courses within the Center. Stanford students have the opportunity to pick an issue and use the semester to determine how they would better the situation. Sarukkai, a Stanford student majoring in symbolic systems stated, “In the land of opportunity it only makes sense that every human being has access to the same resources and pathways to success—an ideal we are far from achieving.”

As an undergraduate capstone project, one CPI team proposed a web platform and mobile app called “CareSwap.” This app is designed to help low-income families trade childcare within their respected network of friends and family. Although the course has ended, the “CareSwap” team plans to continue to develop and execute its website and app. The ending of a course does not mean the work ends.

The course is simply a place where the inspiration begins—the work ethic and dreams of the Center’s students cannot be diminished by the end of a semester. Poverty reduction begins in the classroom but is carried out during the long hours of the student’s personal time.

“Our idea evolved so much in the last few months after our interviews and conversations with parents and childcare experts,” the students said. “We are excited to develop it further next year. This project has become far more than a class assignment for each of us.” An idea that began in the classroom later developed into an app and website, making thousands of children’s lives easier and safer.

Some of the proposed projects may even be adopted for further development by the Stanford Poverty & Technology Lab, an initiative dedicated to developing technology-based solutions to rising inequality in the United States. Currently, the lab is developing an app, under Bill Behrman, director of the Stanford Data Lab, for “mapping” poverty in California. The app has the potential to help government agencies and nonprofits better target certain demographics by delivering estimates of poverty, unemployment, income and other indicators for very small geographic areas of the state.

Innovative and creative thinking are both necessary to tackle any complex topic, particularly poverty. In the classroom, both attributes are present, as well as the ability to look at the situation from various perspectives. The communal feel and global mindset of Stanford are felt in every classroom of the Center on Poverty and Inequality. “It’s not about a professor teaching and the students learning,” one student said. “We’re all just part of the same team trying to build products that work to reduce poverty.”

Reducing poverty encompasses so many different aspects of society. However, like anything truly successful it should begin in the classroom. Poverty reduction can better the quality and longevity for millions of people worldwide, as academics and students studying to better the world—it only makes sense to tackle poverty from inside the classroom through innovation and creative thinking.