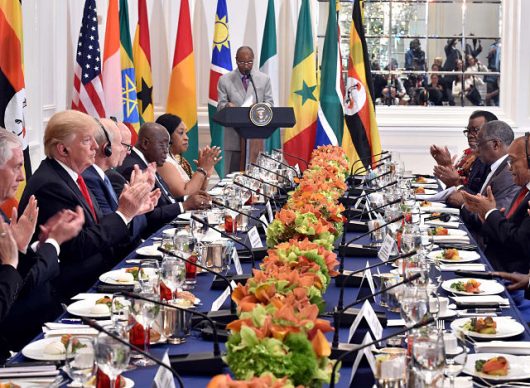 President Trump’s proposed foreign aid cuts have sparked a bipartisan effort in Congress to resist them. Among the proposed budgets, foreign aid to Africa has been affected the most, expecting a 35 percent reduction. On the other side of the world, China is constantly boosting its aid package to African countries. Here is a comparison between the U.S. and China’s foreign aid to Africa over the years.

In the past decade, U.S. foreign aid has maintained at a steady level of $32 billion distributed over 200 countries. The Official Development Assistance (ODA) focuses on three regions: Asia, Europe and Africa. From 1980-2012, almost $120 billion went to sub-Saharan countries like Sudan, Ethiopia, Kenya and Congo.

While the overall ODA budget underwent a 17-fold increase from 1960 to 2006, aid to sub-Saharan Africa increased by almost 3,000 percent, from $211 million to $5.6 billion. The U.S. gave out $97.67 billion over 18 years in ODA to sub-Saharan Africa, with infrastructure projects (48 percent of total aid) and humanitarian aid (26 percent) being the top priorities. The health sector was given $6 billion, the agriculture sector received $4.2 billion and $3.5 billion was committed to education.

China has generated tremendous impact on the aid landscape in Africa since its rapidly increased activities. Unlike countries in the Organization of Economic Cooperation and Development, China does not officially disclose its aid information. In a research published recently, AidData, a research lab at William & Mary, claimed China committed $350 billion to foreign aid between 2000 and 2014, running close to the U.S. total of $394.6 billion.

From $210 million in 2000 to $3 billion in 2011, Chinese investment in foreign aid to Africa experienced a dramatic increase. By 2009, China gave about RMB 250 billion of foreign aid to the world, with almost half (45.7 percent) of the total Chinese aid going to African countries.

Driven by natural resources and its own international economic development agenda, China drew an obscured line between investment and development assistance. Angola, Ethiopia, Nigeria, Sudan and many other countries rich in natural resources like oil, gas and minerals are on the top recipient list of Chinese foreign aid.

In terms of aid priorities, like the U.S., China committed aid to infrastructure development, but with different focuses. Between 2000 to 2013, nearly 60 percent of the total aid went to transportation ($29 billion), energy ($25 billion) and communication ($6.9 billion). After China’s arrival in Africa in early 2000, U.S. foreign aid also shifted to prioritize health and education. U.S. spending on the top three sectors for Chinese aid are only at 2.6 percent, 0.8 percent and 0.07 percent of the total ODA amount.

The emergence of China as a major player in the development of African countries did heat up the competition with the U.S., especially in terms of using foreign aid as a venue to strengthen the donor’s power among developing countries.

Chinese development assistance and other transcontinental infrastructure projects to Africa, like $900 billion to the One Belt One Road Initiative, are growing, but the Trump administration aims to slash the foreign aid budget in 2018, especially the aid to Africa, citing corruption as the main reason. The proposed cut encountered fierce opposition in Congress and was deemed simplistic and arbitrary by Senator Patrick Leahy, the Senate Appropriations Committee’s top Democrat.

On the other hand, China is seeking to establish an international development cooperation agency to coordinate its foreign aid, which “gives China an advantage over the U.S. in the approach to managing foreign aid to Africa,” said China Daily in an editorial on Secretary Rex Tillerson’s visit to China.

Congress will continue to challenge Trump’s proposed cuts and the fight against poverty in Africa will continue.