On June 23, officials announced that the final 8 percent of chemical weapons were removed from Syria. The landmark announcement marked the final shipment of Syria’s 1,300 ton stockpile of weapons, which included mustard gas and raw materials that could be used to create the sarin nerve gas.

The removal of this last shipment of chemical weapons finally arrived after multiple missed deadlines that were originally set by the U.N. The most recent ones were at the end of February and the June 30 deadline to have all of the weapons destroyed. In February of this year the international watchdog group, called the Organization for the Prohibition of Chemical Weapons, said that Syria had only shipped out 11 percent of their chemical stockpile. Many of these delays were largely thanks to the threats and actual attacks from both rebel groups and pro-Assad militias.

While this achievement certainly is a step in the right direction, many questions still remain about how many chemical bombs are still in Syria outside of those that were officially declared by the Assad regime. Ahmet Uzumcu, chief of the Organization for the Prohibition of Chemical Weapons said, “We cannot say for sure it has no more chemical weapons. All we can do is work on the basis of verifying a country’s declarations of what they have. I would not make any speculation to possible remaining assets, substances, chemical weapons…”

After departing Syria, the chemicals will be shipped out to Norway and Denmark via Italy, where they will then be destroyed off the coasts of the UK and Scandinavia in international waters.

There still is an ongoing investigation into President Assad’s use of chlorine, which Ahmet Uzumcu said “may take a little more time.” While chlorine is not lethal and excluded from the list of prohibited toxic chemicals thanks to its widespread commercial use, the gas can still cause a considerable amount of harm and negative health effects. The use of chlorine as a weapon would also violate many international laws and conventions that Assad has previously signed.

Even though the removal of this many chemical weapons will help the situation, the civil war in Syria still continues unabated and with drastic human rights consequences. According to U.S. Secretary of State John Kerry, “We are always going to remain truly appalled at the level of death and destruction that continues to consume Syria, notwithstanding the removal of these weapons.” His words come at a time when 2.5 million people are denied water by opposition groups, 90,000 people lack medical assistance and nearly half of Syria’s population of 22 million have been displaced. While the removal of chemical weapons helps, violence throughout the country sill rages on.

Human Rights Watch is currently investigating whether the Syrian government used chlorine bombs in recent attacks. Last September, Syria complied to dispose of its chemical weapons, around 1,300 metric tons, after external threats from the United States and Russia. Yet, many believe that chlorine was used in recent attacks in the country through barrel bombs.

The barrels, which are stuffed with nails and explosive material, are pushed out of airplanes into areas of rebel, and civilian, congregation — including schools, hospitals and civilian facilities. While the Syrian government has blamed the attacks on terrorist groups, Nadim Houry, the Deputy Director for the Middle East at Human Rights Watch, thinks otherwise.

Since the Syrian government has sole control over the air, Houry believes these attacks are meant to push residents away from these rebel areas. Causing panic amongst the civilian population, it causes them to flee and, subsequently, allows the government to advance more quickly.

While chlorine is not lethal, it can cause serious health problems for those affected. The Chemical Weapons Convention chalks chlorine’s exclusion from the list of prohibited toxic chemicals to its widespread commercial use, which is most commonly used for water purification and bleaching purposes. Yet this notion has been met with criticism; Charles Duelfer, who was head of Saddam Hussein’s investigation under weapons of mass destruction, claims that the magnitude of chlorine bombs equivocates the problem to other chemical munitions which are currently being destroyed.

Syria, which will be holding an election this upcoming Tuesday, has been in civil uproar since 2011, leaving many in rebel areas hopeless. Now, with voting only allowed in regime-controlled areas and set to virtually assure victory for the incumbent Bashar al-Assad, those in impoverished areas of the country are having trouble remaining hopeful.

Ahmed, a young rebel fighter from a now-besieged Deir Ezzor, is just one of many clinging to survival.

“Deir Ezzor is surrounded by the regime and [ISIS] has cut off the only way out,” Ezzor said.  “We will all be killed.”

It is still unclear what exactly happened on Friday, April 11,  in the rebel-held village of Kfar Zeita, 125 miles north of Damascus. A number of reports and video clips reveal that the rural village fell victim to a poisonous gas attack which injured a number of people.

This chemical attack occurs in the midst of an ongoing international effort to rid Syria of all of its chemical weapons.

It is yet unknown who attacked the village or how many citizens were injured but a number of reports have come out making claims.

The Syrian National Coalition said that the poisonous gas attack injured dozens of people but did not identify the gas used. They also urged the UN to conduct a “quick investigation into the developments related to the use of poisonous gas against civilians in Syria.”

The Britain-based Observatory for Human Rights claims that the attack occurred during air raids and reported many people suffering from suffocation and breathing problems.

A Syrian television network blamed the attack on members of the Al-Qaeda-linked Al-Nusra Front rebel group, saying that chlorine gas was used to kill two citizens and injure more than one hundred.

All of these reports remain unsubstantiated but a number of online videos have also appeared, documenting the aftermath of the attack. One video posted by rebel activists show pale-faced men, women and children gasping for air at a field hospital in Kfar Zeita. Another video showed a hospital room in Kfar Zeita that was packed with women and children crying, some of them wearing oxygen masks.

U.S. Ambassador to the UN Samantha Power notes, “We are trying to run this down. So far it’s unsubstantiated, but we’ve shown, I think, in the past that we will do everything in our power to establish what has happened and then consider possible steps in response.”

The gas attack comes at a time when the international community is attempting to eliminate chemical weapons from Syria once and for all. All chemical weapons are supposed to be removed by June 30th, however the Syrian government continues to miss key deadlines.

The Damascus district of Moadamiyeh has been the center of much scrutiny after the chemical weapons attack in August that left hundreds injured and dead throughout Syria. Reports of starvation and disease after this attack forced approximately 5,000 Syrians to evacuate the town of Moadamiyeh and stay in temporary shelters since the August attack. Moadamiyeh was under siege by the Assad regime for several months, as Syrian troops stopped food and supplies from entering in an attempt to weaken the rebel fighters.

The religious restrictions by the Islamic law decreeing a ban on eating cats and dogs was lifted by Muslim clerics for residents of neighborhoods under siege, including Moadamiyeh. Poor families were forced to live off of tree leaves, rotting animal carcasses, and stray pets. With strict regime members blocking all entry roads with snipers and tanks, malnutrition was inevitable for the residents. Mothers with limited food access would give whatever they could find to their children and in doing so were unable to produce milk for their babies. Several cases of child deaths have been reported due to acute malnutrition. Children who were checked into clinics were found to have low blood pressure, dizziness and very low white blood cell amounts.

After finally reaching a rare agreement with authorities, the Syrian Red Crescent and International Committee of the Red Cross were able to gradually evacuate the residents of Moadimayeh. Children, women, and the elderly were the first to evacuate. Several of the residents left in tears while young children clutched the food distributed by aid workers. Men were forced to stay in separate lines while they were questioned about their involvement in the war. Thousands of innocent lives have been spared in Moadamiyeh, but plenty of war-torn towns are still under siege and face heavy bombardment while thousands of civilians wait in silence. 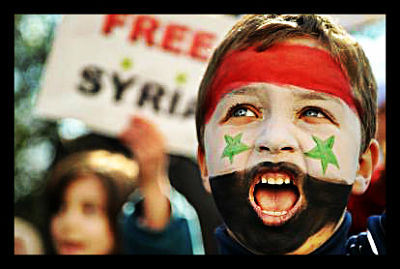 Earlier this week, an attack utilizing chemical weapons in Syria may have left 130 people dead. According to opposition groups, Assad’s government launched rockets with chemical warheads into Damascus suburbs on Wednesday. The government sent further warheads into the suburb on Thursday. Photographic evidence from Wednesday’s attack shows the telltale symptoms of the use of some toxic chemical: difficulty breathing, vomiting, constricted pupils, skin rashes and loose bowels. Western experts believe that sarin gas, an organophosphate agent, was used in the attack.

Secretary Ban Ki-Moon has urged an investigation into the attack, saying that there would be ‘serious consequences’ for those responsible. Ban urged the government to cooperate with the international body, saying,“The time has clearly come for the parties to stop shooting, and start talking. I am determined to do everything I can to assist the victims and move towards a political solution. That is the only way this crisis will be resolved.” Currently, a UN team is in Syria spending up to two weeks investigating the alleged use of chemical weapons by the government. The mandate granted the UN team access to only 3 of 13 sites identified as suspicious before the attack on Wednesday. Angela Kane, the top UN official on disarmament, is expected to arrive in Damascus on Sunday. Kane will push to give UN inspectors access to the affected region.

The Syrian government has not responded to UN requests. Thus far, Syria has not granted UN inspectors access to sites supposedly affected by chemical weapon. Russia, Syria’s arms supplier, said that it was the rebels, not the government, who were preventing UN inspectors from investigating the region. In response, Syrian rebels pledged to guarantee the safety of UN inspectors. Thus far, the rebels have been compliant with these investigations, even sending tissue and blood samples for further inspection.

The international community is conflicted over how to respond to these claims, if they are indeed true. France said that, if the allegations against the government prove to be true, the international community needs to respond with force. Similarly, Turkish Foreign Minister Ahmet Davutoglu said that a ‘red line’ had been crossed in Syria. Although Washington previously said that chemical weapon use was its ‘red line’ in Syria, the Obama administration stated that it was appalled by the allegation and no further plans of retaliation have been put forth. European officials say that there are options, but that they become limited without US support. Furthermore, there is little the international community can do without the support of the Security Council. Russia, Syria’s greatest ally to the Security Council at the moment, went so far as to suggest that the opposition had staged the attack.

According to Ki-Moon, “Our challenge remains: achieving a complete cessation of hostilities, delivering humanitarian assistance and getting the Government and the opposition to the negotiating table in Geneva as soon as possible.” The Joint Special Representative of the UN and League of Arab States for Syria Lakhdar Brahimi said that planning for the second Geneva conference is underway, but that it should take place in September. The last conference in Geneva was held in June with the United States and Russia present. The conference in September would hope to bring a political solution to the conflict. According to Brahimi, a solution is necessary because Syria is “without a doubt, the biggest threat to peace and security in the world today.”