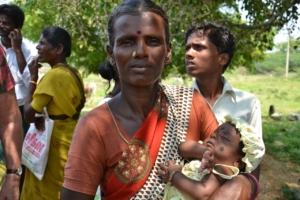 Though information is now a button-click or Google search away, most citizens of first world countries tend not to concern themselves with facts and statistics about world poverty. Even the term ‘developing world’ implies that poverty stricken third world and transition countries are part of an entity somehow separate and removed from the ‘developed world’. Here are some poignant and eye-opening facts about world poverty that many first world citizens are not aware of:

1. Approximately 1.3 billion people live in extreme poverty. Extreme poverty is defined as living on less than $1.25 a day. In addition to this, around 3 billion people—almost half of the world’s population—live on less than $2.50 a day. While this is technically above the poverty line, it would be impossible an impossible task for most citizens of the developed world. To put this in perspective, poverty is defined in the United States as living on around $30 a day.

2. It would cost approximately $40 billion to offer basic education, clean water and sanitation, reproductive health for women, and basic health and nutrition to every person in every developing country, according to dosomething.org. This is less than the U.S. Navy’s newest proposed aircraft carrier production program, which will produce three ships and cost $42 billion.

3. Out of the 2.2 billion children in the world, 1 billion live in poverty. Children growing in poverty often end up stunted and malnourished. 22,000 children die every day due to poverty. The children that survive are forever hindered by their impoverished upbringing, whether from malnutrition, lack of medical treatment, lack of education, or countless other issues.

4. The biggest obstacle to ending world poverty is leadership from the White House and Congress. The US is the first country ever to have both the ability and political influence to end poverty and hunger; all that is needed is more action from the federal government in fighting poverty.

5. CEOs, economists, the business community, and the military all find ending world poverty to be a benefit to their agenda. As citizens of the developing world rise out of poverty and into the middle class, new markets open up for businesses, leading to greater profits. Poverty is also linked to instability and conflict. Military personnel see the importance in addressing world poverty to increase international security.