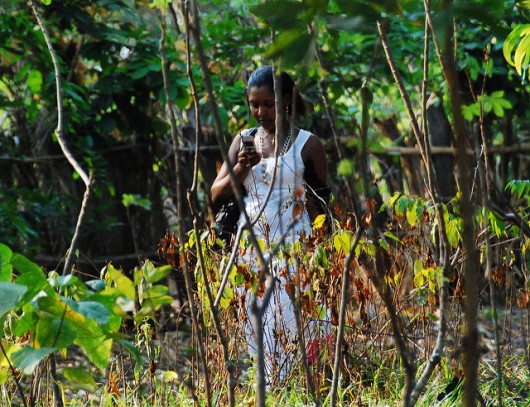 As technology continues to advance and grow more accessible, women around the world are increasingly gaining access to a cell phone for the first time. Though it is taken for granted in much of the developed world, cell phone use opens multiple doors that were not there before. According to Africa in Focus, technology can be thought of as a tool that creates opportunities for women. Specifically, technology has permitted women entry into the realms of finance, education and health and employment, thereby encouraging female empowerment and democratization in low-income countries.

Firstly, cell phone ownership gives women the ability to be financially independent, because they can open an online bank account separate from their husbands’. Impatient Optimists claims that “A private account gives women in developing nations control over their money as well as the ability to put food on the table.”

Currently, 1.7 million women in low-income countries don’t own a cell phone, according to the GSMA (an association representing mobile operators worldwide). Women are also 14 percent less likely to own a phone than men. Therefore, technology is a vital component of big-picture solutions to gender inequality and female disempowerment.

Secondly, cell phones are beneficial in the realm of women’s education and health. Impatient Optimists notes that “The East African nation has rolled out an ambitious program allowing parents to register their child’s birth via mobile phone. Under the program, midwives can request a child’s birth certificate by sending a text message.”

The East African program will save women time and money because they will not have to travel to the capital to acquire a birth certificate for their child. The Millennium project reported that most women live on less than 1 dollar per day. Under such conditions, the option of an online birth certificate can have a dramatic impact. Significantly, children in Africa need a recorded birth certificate in order to access schools, medical care, and, eventually, a bank account.

Thirdly, cell phone access can increase employment for women in Africa. Impatient Optimists points out that having a mobile phone allows women to open their own businesses in remote villages, as opposed to walking a great distance in order to register the business.

The New York Times recognizes that, “economically empowered women are one of the most important engines of growth in developing countries, and they play a central role in building prosperous communities.” That is why women in Africa must have their own phones, instead of sharing with family members.

When women have access to their own phones, bank accounts, and financial situations, they often invest in health-care, nutritious food and education. In fact, The New York Times reports that, “A child born in a household where the mother controls the family budget is 20 percent more likely to survive and much more likely to thrive.”

Women in Africa should be given the power and authority to make financial decisions for their family, given that they tend to prioritize moral and just causes. A mobile phone in the hands of a determined woman could benefit not only the economy, but the daily lives of families across Africa. 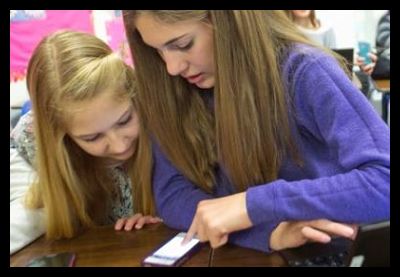 Out of the 7 billion people on the planet, 6 billion have a mobile phone. Cell phones have become widespread in developing countries, and that is not necessarily a bad thing. The mobile technology has become ubiquitous even in poverty-stricken areas and its impact on users is rapidly changing poor populations. Studies conducted in the past have shown that cell phones can provide literacy to the world’s poorest nations.

Literacy is known to be essential for economic development and fighting poverty. More than 1.2 billion people still live in extreme poverty, and nearly 2.5 billion people live on less than $2 a day. Studies have shown that literacy has a positive effect on GDP per capita. It is estimated that if all children from low-income nations could read, the poverty rate could drop by 12 percent.

Cell phones have been named the new important devices in the world. The mobile technology has even helped provide schools, teachers and parents with access to educational insights for success.

Moreover, cell phones help thousands of people in developing countries learn to read using their mobile phones. In fact, before the widespread use of cell phone technology, the adult literacy rate in all of Africa stood at 52 percent; by 2008, the literacy rate had increased to 63 percent.

Illiteracy is partially due to the lack of books in the developing world; an alternative solution to this problem is cell phones. Cell phones are inexpensive, convenient, cost-efficient and provide electronic books in the hands of developing nations.

Literacy not only empowers people, but it empowers the mind as well. When it comes to alleviating global poverty, literacy is important for development. Women who are involved in literacy programs and activities obtain a better knowledge of health and family planning. Additionally, children who have parents that are literate are more likely to be enrolled in an educational program and have extra support toward their studies.

Reports have also shown that low literacy costs the healthcare industry over $70 million each year. Children whose mothers can read are 50 percent more likely to survive past the age of five years old. To be able to read can be vital for survival; understanding medical guidelines or security instructions are crucial for a person’s health and safety.

Literacy also develops societies on a political level. People who are literate have the upper hand in becoming more educated, and therefore are more likely to become civically engaged. Whether they are involved in labor unions, politics, or community activities, they will have the opportunity to change the world. To be able to read, write and count contributes to an individual’s self-development, and allows each individual to have their own sense of personal freedom and better understand how to adapt to the constantly changing world. 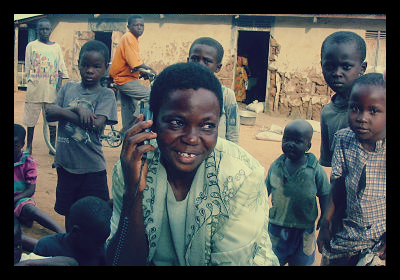 Australian start-up biNu may be pioneering revolutionary cell phone technology. By minimizing the required bandwidth and memory capacity of the user’s phone, biNu brings smart-phone level applications to ‘dumb’ phone users for little to no cost, and emphasizes reliability in weak or spotty networks, which cover a majority not only of the developing world, but the planet as a whole.

$7.5 million in funding from Eric Schmidt and others, and a UN ‘My World Innovation’ Award later, it seems the technology is working.

biNu dramatically widens two data streams currently existing in stunted forms. One of these is headed into the developing world. At least 4 million users in the developing world access the biNu cloud every month, utilizing hundreds of millions of webpages. Phones that were previously only usable to make calls are now empowered with the apps of corporations, governments, NGOs, and more, bringing an unprecedented level of information and communication to poor regions.

This stream is also significant for its profitability – for both biNu and others. Gary Lentell and Dave Turner, biNu’s founders, know first-hand how volatile the tech start-up world can be, having already lost all $75 million they made with their previous business, Sabela Media; biNu’s ability to bring new markets into touch with marketers means it stands to make a profit as the middle man.

But the companies who can present ads to these new markets may be the ones who profit most dramatically – if they can capitalize on the face-time as efficiently as Google has. In this way, biNu is for software what the cell phone was for hardware: a lead forward in terms of inter-connectedness.

The second data stream is headed out of the developing world, to NGOs and research institutions who now have direct access to the people they are trying to help. This second stream has already been dramatically influential, enabling over 100,000 responses to a UN survey which utilized the software.

As more NGOs become aware of biNu’s potential, its ability to make direction connections between aid givers and aid receivers will proliferate and create a more seamless development community – a community which currently suffers greatly from a major divide between those who have the resources and desire to help, and those who require help.

Lentell has repeatedly stated his interests lie dominantly in creating a solid, profitable business – not in helping people, which is only a perk. While many CEOs who express such sentiment earn derision for not being in touch with economic reality, NGOs and the developing world should be grateful to have such a practical mentality heading biNu.

Too many start-ups with the revolutionary potential of biNu sputter and die because of overly idealistic leadership. BiNu’s best chance to bridge the Digital Divide is to focus on itself and its profitability, continue to pursue the best technology and the most reliable investments, and allow its users to dictate how biNu is applied to the developing world.

Sources: Venture Beat, The Next Web, BINU, BINU: How It Works, INC 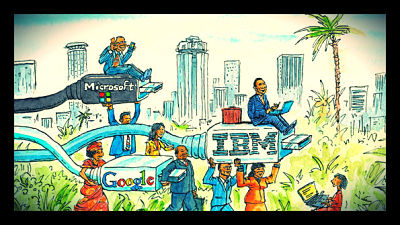 While Africa has its share of security issues, it has its share of economic growth as well. In fact, as a continent, it is growing at a faster rate than North America. This has spurred a big push in many African countries to modernize technologically which has given rise to many tech hubs and even a few tech cities. All of this begs the question: What are American tech companies doing to contribute to and capitalize on this type of growth? Here is a list of what three of the largest American tech companies have been up to in Africa.

IBM
IBM recently opened an office in Dakar, Senegal which the company believes will bring in roughly $20 billion by 2015. IBM is no stranger to the region as it sold supplies to South Africa in 1911. Recently, IBM has become more and more focused on Africa and has established a presence in 20 of Africa’s 54 countries. No doubt IBM is hoping to establish a bigger presence in many of the upstart tech hubs which have begun sprouting up all over the continent.

Microsoft
In an attempt to gain ground in the smartphone market as well as capitalize on Africa’s quickly growing tech industry, Microsoft has introduced its Microsoft 4Afrika initiative.  Microsoft 4Afrika will be producing a moderately price $150 smartphone. The phone will be marketed toward Africa’s middle-class which comprises one quarter of Africa’s billion people. Microsoft has plans with Nokia to release two more smartphones in the near future. This decision was likely influenced by Africa’s number one spot as the world’s fastest growing region for smartphones. The region has grown by 43% per year since 2000.

Google
Google chairman Eric Schmidt noted that Nairobi has become a remarkable tech hub and has the potential to become an African leader in innovation. However, Google seems to be losing ground in Africa as French based mobile operator Orange and Baidu, China’s answer to Google, have collaborated on a jointly branded smartphone. This comes as no surprise as China has been aggressive in its attempts to forge business partnerships all over the quickly changing continent.

Africa’s main draw to tech companies is that it continues to grow while larger economies have stalled. If this trend continues, those companies who are left behind investing in these developed markets may see their profits eclipsed by these fast growing economies.