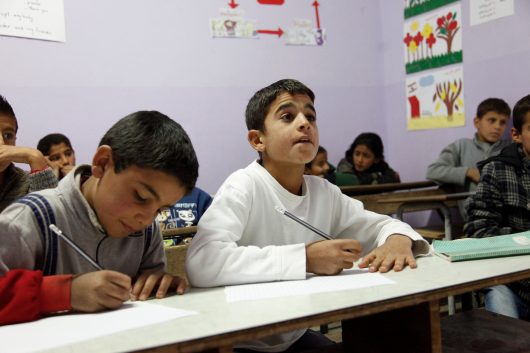 There are many pressures on Syrian children in Jordan to work in their adolescent age, which resulted in only around 5,500 of secondary school-age students enrolling in education in 2015. Moreover, the percentage of child marriage of Syrians in Jordan increased from 12% to 32% since 2011.

In order to solve the growing issue, Jordan’s Education Ministry has been stepping up to accommodate Syrian refugee children’s education. The aim of the ministry is to create 50,000 new public schools for Syrian children and to reach 25,000 children who are currently out of school with “catch-up classes.”

In September 2016, backed by international funding, Jordan launched the back-to-school program, which will have a great impact on each child. The Jordanian government looks to add more afternoon shifts, hire more teachers and expand the space to address its major obstacle: lack of classroom space.

The donor aid was given to Jordan in February 2016, with an amount worth $700 million every year for the next three years in attempts to expand education opportunities for Syrian refugee children. According to Mohammed Thnaibat, Jordan’s education minister, Jordan needs around $1 billion in order to educate refugee children and ease the overcrowding of space in schools. The aid money will be used to build 500 more classrooms, hire 5,000 teachers and build 300 new schools in Jordan.

There are a number of refugee children in Syria who are almost illiterate because they have not gotten the education they need for a long period of time. However, with foreign aid and donors helping Jordan to provide education for Syrian children, it is no doubt that more Syrian refugee children will be able to get access to education in the near future.