Tag Archive for: Carry the Jerry 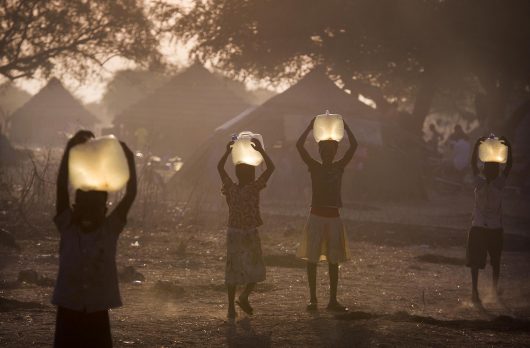 Getting safe and clean water in Sudan continues to be an ongoing struggle that the Sudanese people have endured for decades. Plagued by war, poverty and disease, the ongoing water stress in Sudan has created a strain on political and economic situations and taken a toll on infrastructure and agricultural systems.

Given that the livelihood of Sudan is reliant on the agricultural industry, which requires 97 percent of the country’s water usage, the lack of rainfall and desertification has contributed to a prevalent impoverished state. Family displacement is a continuous problem as families seek out potentially prosperous land elsewhere.

To put into perspective, the U.S. domestic water use “accounts for 13 percent of total supply,” whereas availability for the domestic use of clean water in Sudan is two percent. Adding to this insufficient supply of water, issues such as a rapidly increasing population, drought and the unregulated disbursement of large water sources, such as the Nile River Basin, are being ignored.

While economic and political strife remains, family life is also at stake. Each day a mother or child must walk far distances in order to gather the necessary amount of water needed to cook and clean. Oftentimes, an individual can travel up to four hours to locate a safe water source, while risking their safety due to prevalent gender violence. Such demands cause children to forego education in order to help contribute to family needs. Every day an individual is faced with the possibility of running out of the clean water gathered that day and deciding whether or not to risk their health by drinking from a risky water source.

Lastly, the most important consideration in the face of Sudan’s water crisis is protecting and sustaining the health of the population. Misuse of water sources, pollution and fecal contamination are key contributors to the waterborne diseases that spread throughout Sudan. In 2004, 3,753 cases of Hepatitis E were contracted within four months and in 2006, 476 deaths in just five months occurred as a result of contaminated water. Other common waterborne diseases include Guinea Worm Disease from which three out of five cases originate in Sudan.

Fortunately, many organizations and nonprofits have aided in the redevelopment of the water quality in Sudan. Water is Basic was formed in 2006 following the Comprehensive Peace Agreement, which set out to end the civil war in Sudan. Since 2008, the organization has installed and restored over 500 clean water wells and “to date, [has] brought clean water to 10 percent of the total population of South Sudan.” Their Carry the Jerry annual race has brought awareness to the hardships Sudanese people endure as participants complete the race by carrying the Jerry cans used to transport fresh water to and from non-local sources.

Similarly, a 2012 pledge from Japan, promising $50 million in infrastructural aid is projected to be completed in 2017. This will provide clean and convenient water access to 400,000 residents of Juba, Sudan. Other ongoing effort initiatives exist from numerous organizations such as Water For South Sudan, the Water Project and Africa Heartwood Project.

The current global efforts to provide clean water in Sudan has introduced a new hope for the Sudanese by empowering them to establish community and leadership with the ultimate hope that Sudan will one day be a self-sustaining country. With the help of various organizations, jobs have been established for Sudanese individuals providing them with income to send their children to school, preserve their households, and to “dream of a future.”